The deceased was enroute Atapa/Iresa Adu Road on Sunday evening when a suspected herdsman bumped into the road with his cows. 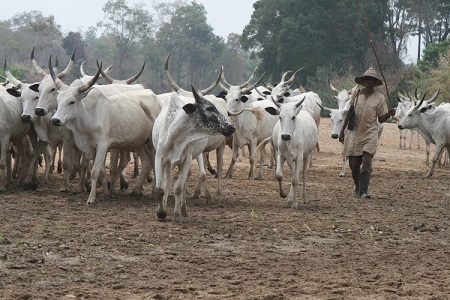 Some herdsmen have taken to their heels after their cows reportedly killed a 30-year-old man and father of a newborn baby, Benjamin Oyelade.
It was gathered that the man died after the cow into him in Atapa area in the Surulere Local Government Area of Oyo State.
SaharaReporters gathered that the deceased was enroute Atapa/Iresa Adu Road on Sunday evening when a suspected herdsman bumped into the road with his cows and the victim was knocked off his motorcycle.
It was learnt that the cows’ horns hit him on the head and broke his skull.
The deceased sister who identified herself as Olawunmi said his child christening ceremony and house warming were slated for Monday, September 20, 2021.
She added that the herders fled the scene immediately after the incident.
“Today (Monday) ought to be his day, he is meant to name his child and dedicate his new house, but instead of these we are mourning him. We have buried him.
“He saw his child but didn’t wait to name the child,” Olawunmi said.
She expressed regret that security agencies including the Amotekun Corps could not apprehend the herdsman or impound any of the cows.
Olawunmi added that some youths traced the herd to a herders’ settlement in annoyance and destroyed part of the settlement by burning down a hut.
The Oyo Police Public Relations Officer, Adewale Osifeso, promised to get back to SaharaReporters with full details when contacted but he failed to pick his calls hours after.
Top Stories