Speaking during the plenary session on Wednesday, Elumelu said the situation is dangerous to lawmakers’ safety, the News Agency of Nigeria reports. 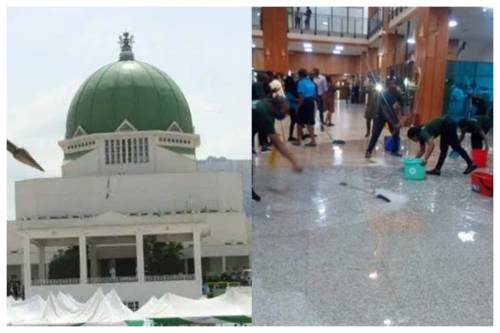 Ndudi Elumelu, the minority leader of the House of Representatives, has raised a point of order during the plenary on Wednesday protesting the leaking roof of the National Assembly complex.

Speaking during the plenary session on Wednesday, Elumelu said the situation is dangerous to lawmakers’ safety, the News Agency of Nigeria reports.

He highlighted the dangers inherent in coming to plenary to make laws under a leaking roof.

”Our chamber is leaking. While coming into the chamber this morning, we noticed the cleaner making a frantic effort to scoop the water.

“This is dangerous to our day to day lawmaking, we cannot be representing our people and speaking for them under a leaking roof,” he said.

The Speaker, Femi Gbajabiamila, said Elumelu’s point of order was noted, saying, “this is very important to us.”

Leaks from the roof of the national assembly building had before now disrupted plenary sessions.

The incident which followed a downpour occurred at the ‘White House’, the portion of the parliament building housing both upper and lower legislative chambers.

Many lawmakers were stranded for some minutes before the rain subsided.

The lobby of the national monument became impassable while cleaners were immediately mobilised to clear the pool of water.

In June, the National Assembly leadership had come under attack following an embarrassing viral video showing flooded chambers, lobby, and offices being mopped up by cleaners following a downpour.

The Federal Capital Development Authority (FCDA) later came out to explain why it cannot immediately fix the National Assembly Complex's leaking roof or do a total rehabilitation of the complex.

It said the contract for the project is currently undergoing procurement processes.

A few weeks later, the foyer of the White House segment of the complex was flooded after a heavy downpour.

The National Assembly structure which was built about three decades ago had its lobby turned to a fishing pond during the heavy downpour.