The couple were recently employed on a part-time basis by a marketing company, and were traveling to Azare for a promo activation when they met their death. 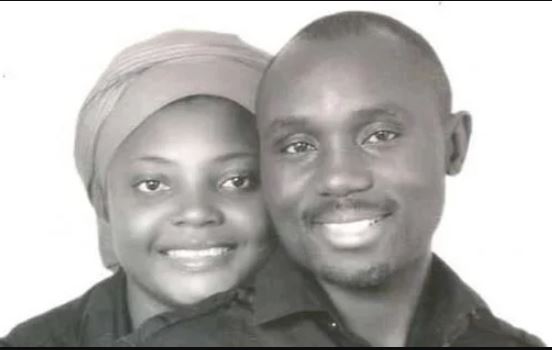 Tears poured down the eyes of many as the remains of a couple, Kenneth Azifor and his wife Sandra, who died in a fatal crash along the Darazo-Kari-Azare road in Bauchi State, were buried.

The couple died 15 days ago in the ghastly accident that also claimed one other life.

It had been reported that Azifor, a Cameroonian pastor and French teacher living and working in Bauchi, his wife Sandra and two other people, were traveling to Azare, Katagum Local Government Area headquarters on Friday, 17th September 2021 when they had a lone fatal crash. Only the driver of the vehicle survived.

The couple were recently employed on a part-time basis by a marketing company, and were traveling to Azare for a promo activation when they met their death.

The Sector Commander, Federal Road Safety Corp, Bauchi State, Yusuf Abdullahi, who confirmed the crash to our Correspondent in a telephone conversation, said that it was caused by ‘wrongful overtaking’ and the driver lost control while returning to his lane.

The remains of the couple who got married in 2012 were laid to rest on Saturday at the Christian Cemetery, Rafin Zurfi, after a funeral service was held at the Overcomers’ Chapel, Federal Polytechnic, Bauchi.

Family and hundreds of church members, neighbours and sympathisers could not hold their emotions, as they cried uncontrollably.

Azifor, the first of his parents’ eight children, was born in Baffousssan, West Region of Cameroon. He held a Bachelor’s degree in Political Science from the University of Jos, Plateau State, an MSc in Conflict Management and Peace Studies, and a Postgraduate Diploma in Education. He was aged 45.

His wife Sandra, an indigene of Ogbangede, Agatu Local Government Area of Benue State, held a Diploma in Accounting, and was the sixth of seven children. She died at the age of 40.

In her tribute, Kenneth’s mother, Christiana Azifor, said it was hard for her to believe that her son was dead.

The couple left behind siblings, relatives and three young children, with the first child said to be about eight years old.