Nobel Peace Prize for 2021 has been awarded to two outstanding journalists. 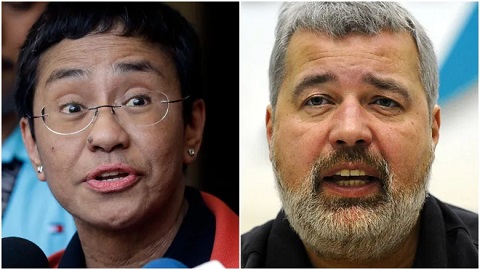 The journalists who just won Nobel Peace Prize
Two outstanding journalists have been awarded the 2021 Nobel Peace Prize.
The two journalists are: Maria Ressa and Dmitry Muratov.
The award is for their efforts to safeguard freedom of expression in the Philippines and Russia, respectively.
Ressa is the CEO of Rappler, a news outlet critical of Philippine President Rodrigo Duterte’s regime, while Muratov heads the independent Russian newspaper Novaya Gazeta.
“Free, independent and fact-based journalism serves to protect against abuse of power, lies and war propaganda,” Berit Reiss-Andersen, chair of the Norwegian Nobel Committee, said as she announced the prize in Oslo on Friday.
She said the committee’s choice “is intended to underscore the importance of protecting and defending these fundamental rights.
“It is the 102nd time the prize has been awarded. Previous winners include Nelson Mandela, Martin Luther King, Jr., Polish dissident Lech Walesa, the Soviet Union’s last leader Mikhail Gorbachev, and four US Presidents.
Last year the UN’s World Food Programme claimed the prize.
Ressa becomes the first woman to be awarded a Nobel Prize this year.
The awards in medicine, physics, chemistry and literature were given out earlier this week.
Top Stories