Police Launch Search For Killer Of Retired Officer In Abuja


The protest is an agitation for the students' bursary payment and proper funding of the education sector in the Niger Delta region. 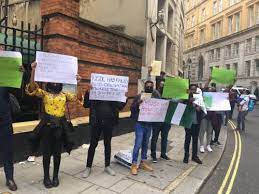 Some Nigerian students under the aegis of the Niger Delta Students Union Government have scheduled a protest against the Niger Delta Development Commission for Tuesday, October 12, 2021, according to SaharaReporters.

The protest is an agitation for the students' bursary payment and proper funding of the education sector in the Niger Delta region.

According to the students, NDDC has failed to honour several promises and agreements signed with the students' body.

In 2020, SaharaReporters reported that many scholars abroad were at risk of having their institutions terminate their academic programmes as the NDDC had refused to pay their tuition for about two years.

The students abroad had said the commission refused to pay their mobilisation fee and tuition fees.

“The NDDC selectively handpicked those it paid without any defined criteria and is refusing to pay fees, grants, and upkeep of 2018 scholars for no justifiable reason whatsoever,” the students had said.

“This came as a rude shock to us because historically, the NDDC had always paid the fees and upkeep of scholars in the order in which they were incurred, that is, from the earliest to the latest.”

In August, 2020, President Muhammadu Buhari gave the NDDC one-week ultimatum to pay the scholars’ fees but the then interim management of the commission refused to issue the payment.

The NDDC is not new to scandals as the officials had been several times accused of multi-billion naira fraud.

In September 2021, it was exposed that at least N15.3billion was paid to contractors to execute some high priority projects for the NDDC but which could not be accounted for.

According to a report by the Civil Society Coalition on Audit in Nigeria (CSCAN), the controversial contracts were awarded from 2008 to 2018.

According to the coalition, the discovery was made after it conducted physical verification of 115 of 176 NDDC contracts highlighted in the Compliance Audit Reports on NCDC published by the Office of the Auditor-General for the Federation.

Homebreaker?: 'If I Can't Have You, Nobody Can' - BBNaija Maria's Old Post Surfaces

Police Launch Search For Killer Of Retired Officer In Abuja