It was gathered that the police arrested Chikwere on the orders of the Governor of the state, David Umahi. 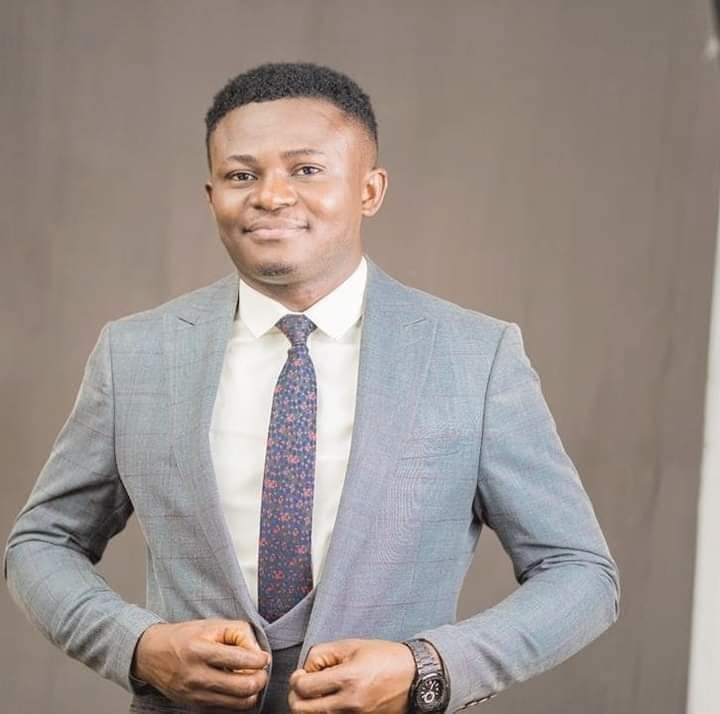 Chikwere
A Nigerian journalist, Godfrey Chikwere has been arrested by the Ebonyi State Police Command over a Facebook post.
It was gathered that the police arrested Chikwere on the orders of Governor of the state, David Umahi.
The presenter/anchor at Broadcaster, Salf FM, was arrested by the police during the weekend following a petition by the government accusing him of fake news, hate speech, incisive publication and cyberbullying.
The petition dated October 8 and signed by Ebonyi State Commissioner for Information, Orji Uchenna Orji to the State Police commissioner, says that Chikwere made a "dangerous and disturbing publication intended to cause fear and breach of peace in the state"
“I write to inform your esteemed office as follows: That on the 8th day of October, 2021 at about 14:44 hours, one Godfrey Chikwere with phone number 080615707** did publish fake news and incisive post in Facebook profile called Godfrey Chikwere and other media platforms and stated as follows: Nigerian Army is seriously and willingly losing respect," the petition read.
"That on the same 8th of October, 2021, Godfrey Chikwere in the Facebook profile made a dangerous and disturbing publication and stated as follows: ‘They (politicians) can pay a youth to murder a perceived political enemy but they can’t give such youth money to start a business. That this false, fake and incisive publication is intended to cause fear, cyberbullying, riot crisis and breach of the peace in the state."
Meanwhile, aggrieved youths and activists in the state have taken to social media to demand for the release of the journalist under the hashtag  #FreeGodfreyChikwere
"The ordeals of Godfrey Chikwere The news of arrest and detention of Mr. Godfrey Chilwere popularly known as baby mouth sounded like a joke to me until I saw the attached documents signed by the Ebonyi State Commissioner for Information and State Orientation, Barr Uchenna Orji," a Facebook user, Israel Ekene Mbam, wrote.
"While we condemn the spread of fake news, people should as well be on the know that from this action, more persons will now be on government and security agencies watch list for fake news. On the other hands, FIO should be properly implemented and respect for human right should also be applied in this case. 2023 is around the corner. May we not be a victim of the unknown." he added.
Peter Bethran, said: "NUJ should clamp down on Ebonyi state Government by making sure that all the government activities are not covered as a means of protest to ask for the release of their own person Godfrey Chikwere . If things are not done very urgent intermediation and harassment of media and press men will continue."
"Make una free this young man Godfrey Chikwere is high time government occupy (sic) themselves with relevant issues in the society instead of pursuing shadows. His arrest will end in futility#FREE CHIKWERE Now!!,” a Facebook user, Richard Nwafor posted.
An activist, Apst. Benjazy Nweke Oyenge said, “Don't blame the governor of Ebonyi state for signing the law against fake news, blame your house of assembly members who allow (sic) the said law pass through all the necessary proceedings knowing fully well that it will be used against those who criticize or speak against any wrong governmental decision against the citizens.
"The present day House of Assembly in Ebonyi state are so interested in their personal gain from his Excellency forgetting their constituents who elected them to represent them. The ongoing arrest in Ebonyi state is nothing but a political fight against any perceived political opposition member in the state
"Those that passed the bill into law should not forget that they will not remain in ruling party forever, tomorrow the same law may land on their skull for speaking against the government in power
"Godfrey Chikwere is a law-abiding citizen and should not be held captive for expressing his fundamental human right which is freedom of speech except we don't have such law again in Ebonyi state. It is only a military government that will not accept criticism, but in a democratic setting, criticism is one of the instruments of good governance. A reasonable government take correction from criticism and not otherwise. #FreeGodfreyChikwere" 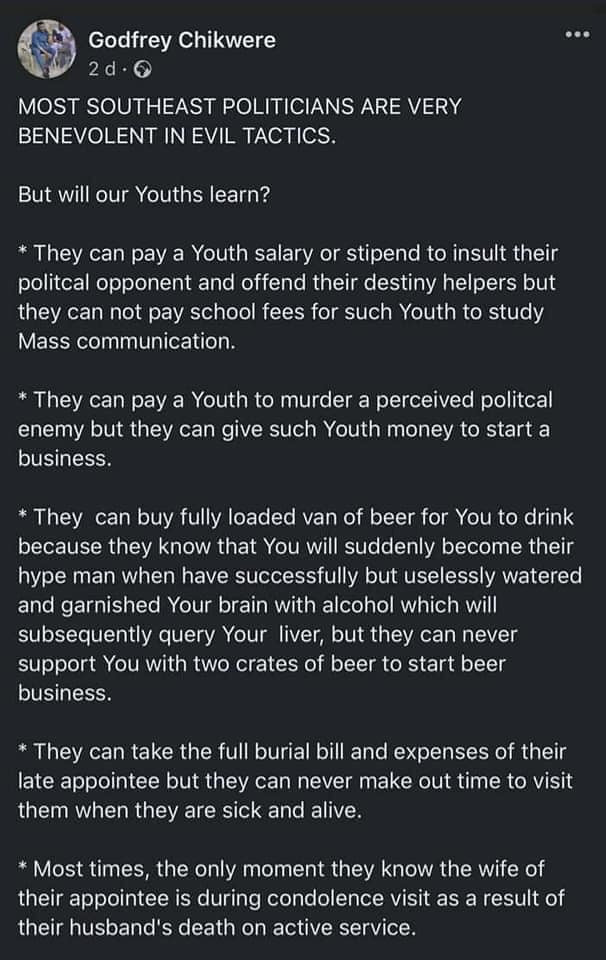 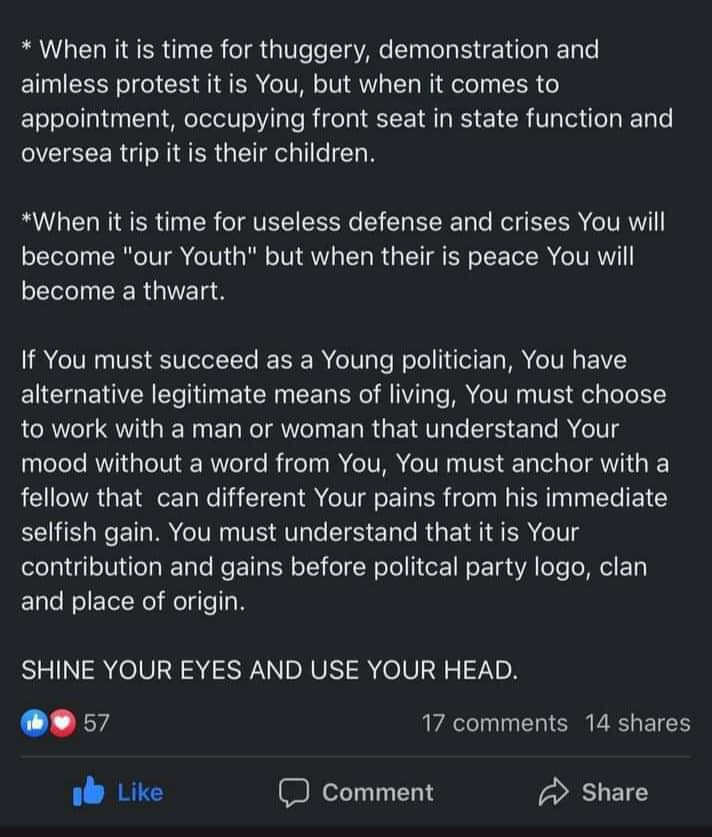 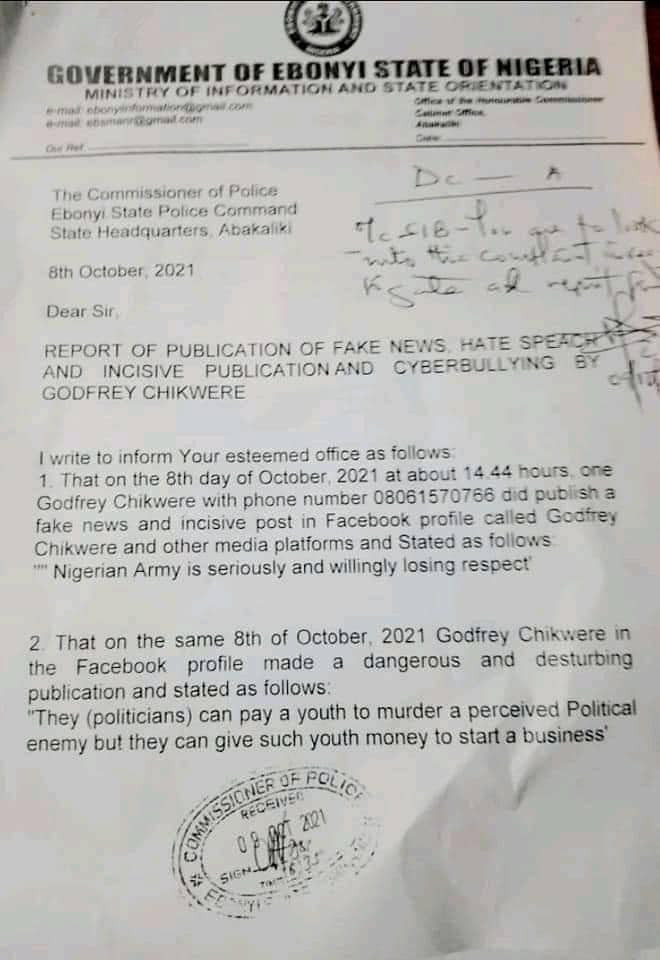 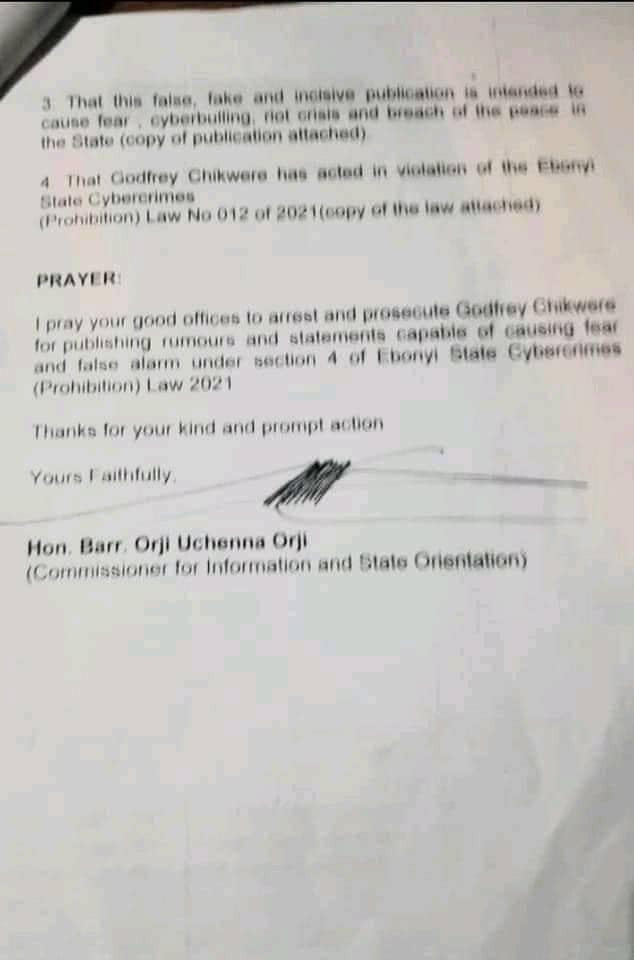 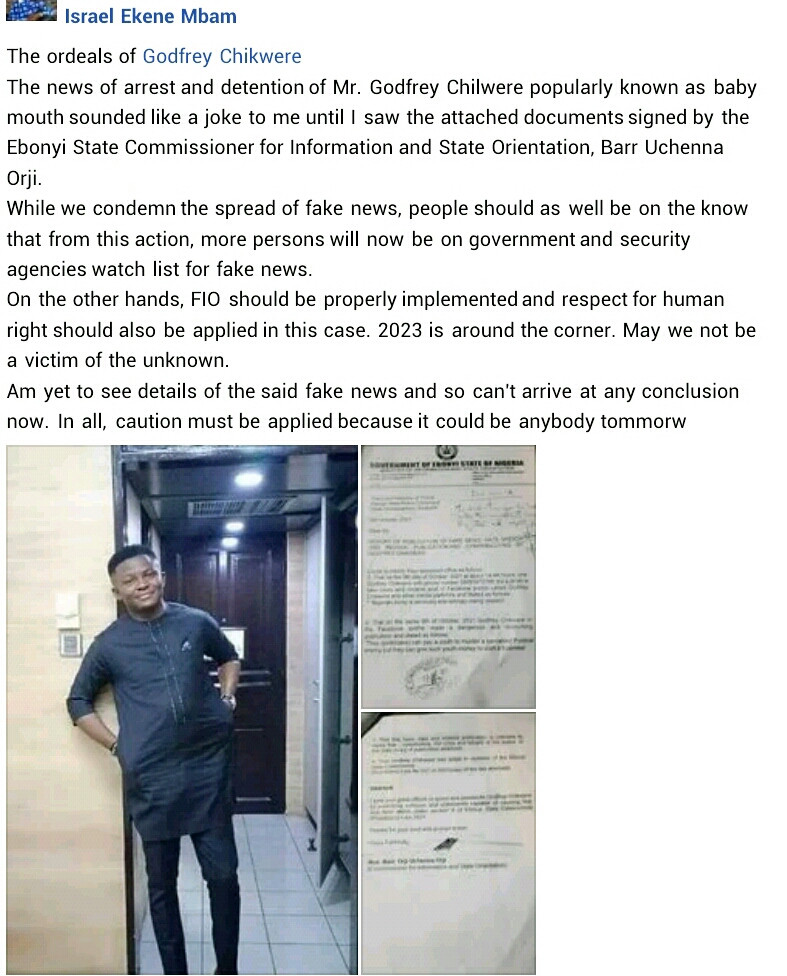 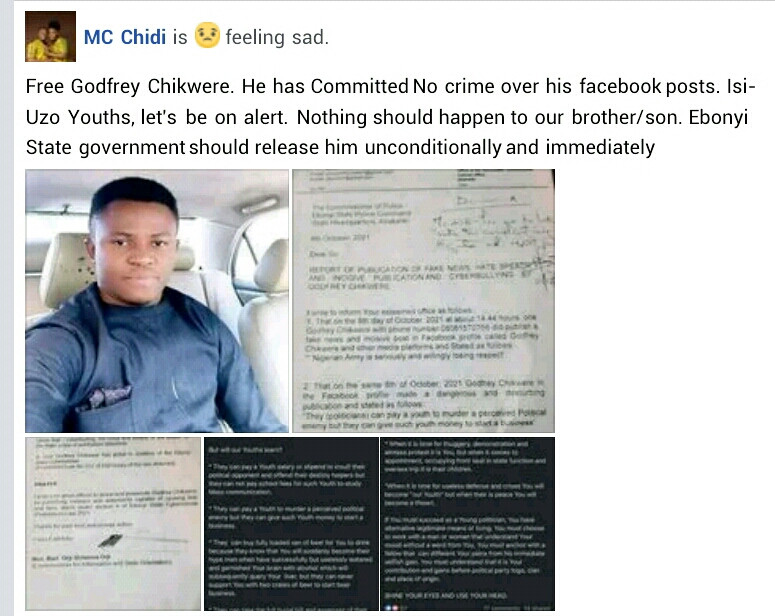