While the singer was performing, the lady showed a lack of interest which led to him slamming her. 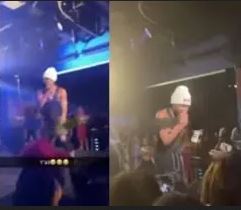 A video has surfaced online showing the moment Nigerian singer, Stanley Omah Didia aka Omah Lay slammed a female fan for not actively participating at his concert in the United States.

Omah Lay commenced his U.S. tour on September 27, and performed in different cities up until his last tour which was on October 13.

In a video from his last concert in Texas, the ”Damn” crooner was performing when he noticed that one of the attendees was not singing along or dancing.

He asked the DJ to stop playing, after which he pointed to the lady and said that he does not want to see her there.

Omah Lay then asked if she does not like his song or if she did not come to see him.

After she gave an inaudible explanation, he further insisted that she should not be at the front row.