Jalingo is said to appear before a Federal High Court today on charges bordering on terrorism and treasonable felony. 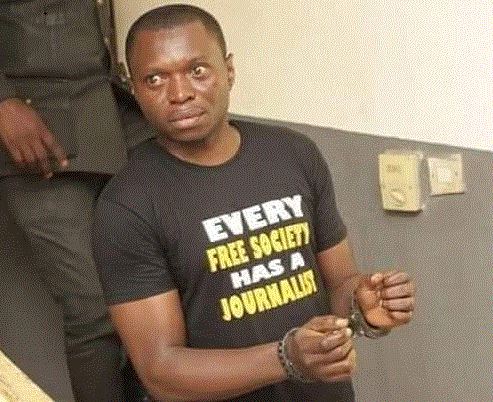 Journalist Agba Jalingo will appear before a court in a Cross River court on Monday, October 18.

The publisher of Cross River Watch was arrested following an allegation of treason by the Cross River State Governor, Benedict Ayade.

Jalingo was first arrested by the Police in August 2019. He was subsequently arraigned for treason and attempting to overthrow the state government due to highly critical articles he published.

However, in a statement signed by the Co-convener of the #JalingoIsInnocent Campaign, Jonathan A-Ugbal, Jalingo is said to appear before Justice Ijeoma Ojukwu at Court 1 of the Calabar Division of the Federal High Court today on charges bordering on terrorism and treasonable felony.

The statement, which was posted on the activist’s Facebook page, read in part, “It has been over 612 days after Comrade Agba Jalingo appeared in Court before Justice Sule Shuaibu to face the laughable but criminally masterminded case of terrorism, treasonable felony and attempt to topple the government instituted against him by folks who buffet on our commonwealth a la carté.

“He will face Justice Ijeoma Ojukwu at Court 1 of the Calabar Division of the Federal High Court today, October 18, 2021, by 9:00 am. His crime has remained to ask for the whereabouts of the N500m approved and released for the floating of the Cross River Microfinance Bank by Governor Benedict Ayade. He risks a life sentence at best and a death sentence at worst for demanding accountability

“Join us in solidarity to attend this history-making session by 9:00 am at Court 1 of the Calabar Division of the Federal High Court to remind the baby dictator that; ‘a people united, can never be defeated’ and that; ‘tyranny will always fail because those who abuse power are weaklings who mask behind the decision of the masses to do nothing’.”