The investigation of the incident, including the taking of evidence and exhibits, has been completed. 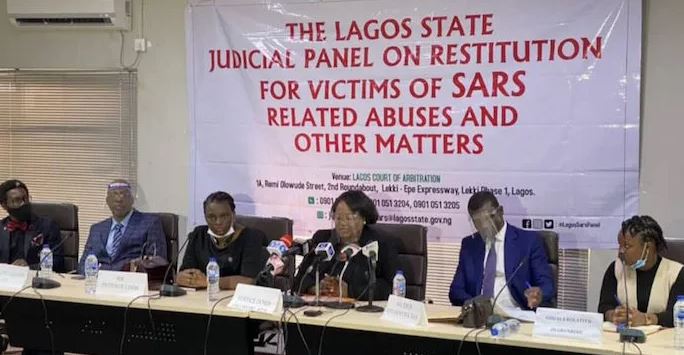 The Judicial Panel of Inquiry investigating cases of police brutality and human rights abuses by the disbanded Special Anti-Robbery Squad (SARS) has ended its sitting in Lagos.

But the long-awaited report of the October 20, 2020 Lekki Tollgate ‘shootings’ is being prepared, Panel chair, Justice Doris Okuwobi has said.

She said the investigation of the incident, including the taking of evidence and exhibits, had been completed.

The judge emeritus assured petitioners that the panel’s recommendations would include compensation to victims, if any, of the Lekki Tollgate incident.

Police victims of the violence, if any, would also be recommended for compensation, Justice Okuwobi assured.

There are no fewer than 14 petitions relating to the alleged shooting incident, out of the 235 petitions received by the panel between October and December 2020.

The petitioners alleged that soldiers from the Army’s 81 Division, Victoria Island, Lagos fired live bullets on peaceful demonstrators, injuring and killing some.

They claimed that after the soldiers left, policemen arrived and shot at the protesters that returned to the scene.

But the army, which appeared thrice before the panel, denied the allegations, saying soldiers fired blank bullets in the air to disperse the crowd.

It, however, shunned repeated summons by the panel requiring it to respond to petitioners’ further questions and protesters’ evidence challenging its claims.