Malami in a statement also ordered a probe into the circumstances surrounding the raid of the justice’s home. 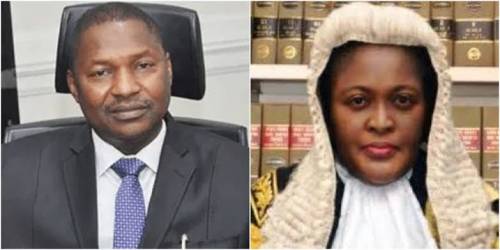 Abubakar Malami (SAN), the Attorney-General of the Federation and Minister of Justice, on Saturday denied that he was involved in the reported invasion of the residence of a Justice of the Supreme Court, Mary Odili, by security operatives, according to SaharaReporters.

Malami in a statement also ordered a probe into the circumstances surrounding the raid of the justice’s home.

The statement by his Special Assistant, Media and Public Relations, Umar Gwandu, said the AGF would not relegate himself to delve into issues of warrants, although Gwandu failed to clarify where the warrant emanated from.

He said, “It is important to set the record straight that as the Chief Law Officer of the federation, Malami will not stoop too low to be associated with an apparent in-elegant and nasty court process on the strength of which the purported search warrant was procured.

“The media reports on the issue depict too untidy process that could never emanate from the Office of the Honourable Attorney-General of the Federation and Minister of Justice.”

“The Office of the Attorney-General of the Federation and Minister of Justice has since reached out to the relevant authorities for an intensified wider investigation on the matter for necessary actions leading to the prosecution of anyone involved in the matter in view of the fact that the only names on record from the process filed in Court are a purported police officer who claimed to be “O/C Assets Recovery Team” and one Aliyu Umar a deponent in the affidavit.

SaharaReporters had earlier reported today that the Chief Magistrate of Wuse Zone 6 Magisterial division in Abuja, Emmanuel Iyanna, admitted that he was lied to which made him sign a search warrant for the residence of Supreme Court judge, Mary Odili.

Iyanna had said he was misled by the Federal Ministry of Justice under Malami.

The Chief magistrate consequently revoked the search warrant he approved against Justice Odili’s residence due to misrepresentation in the first information application supplied by an ad-hoc public asset recovery panel domiciled under the justice ministry and overseen by Malami.

“Upon misrepresentation to this honourable court that led to the issuance of a search warrant in favour of Joint Panel Recovery, Ministry of Justice, against House 9, Imo Street, Maitama, Abuja, dated October 29, 2021; in view of the above fact, the said search warrant is hereby revoked,” he had ruled.

Armed operatives had stormed Odili’s residence bearing a warrant that was issued based on a whistleblower’s information from Aliyu Umar, an Abuja resident.

Umar had deposed on October 13 that there were illegal activities going on at 9, Imo Street, Maitama that should warrant immediate action from the law enforcement.