I Was Misled To Leave Alaafin's Palace - Olori Damilola Confesses


Damilola claimed she fled the palace after being imprisoned in a cell for breaking a palace regulation. 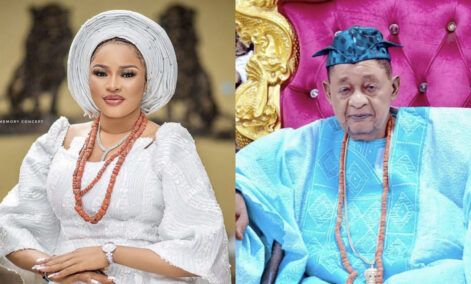 Damilola and Alaafin
Olori Damilola Adeyemi has revealed that she was misled to leave the her husband, Alaafin of Oyo, Oba Lamidi Olayiwola Adeyemi III.
She has now tendered an apology.
Recall that while fleeing the palace in April 2021, Damilola had claimed she fled the palace after being imprisoned in a cell for breaking a palace regulation.
She had slammed the 83-year-old monarch and the palace in several of her remarks.
In a new development, Damilola, in a post shared on her Instagram page has apologized to the monarch for speaking ill of him.
She mentioned that frustration and some friends misled her to leave the palace.
She took to her social media page and wrote: ”I WANT TO USE THIS MEDIUM TO TENDER UNRESERVED APOLOGIES TO THE ENTIRE FAMILIES OF ADEYEMI ( ALAAFIN OF OYO) OVER MY LAST POST. PLS I WANT YOU ALL TO KNOW THAT I’M NOT UNDER DURESS IN SENDING THIS MESSAGE AND THAT I’M IN GOOD STATE OF MIND.
“THAT ALL THAT I SAID IN MY LAST POST ABOUT LEAVING THE PALACE AND THAT ALAAFIN WAS NOT TAKING CARE OF ME AND ALL WHAT I SAID NEGATIVELY CONCERNING HIM(ALAAFIN) WAS FALSE IT WAS FRIENDS THAT MISLEAD ME AND OUT OF FRUSTRATION.BUT NOW THINGS ARE CLEAR AND I’M SINCERELY SORRY FOR TRYING TO BRING DOWN THE ROYAL FAMILY.
I HAVE BEEN TO LAGOS AND ABUJA TO SEEK FOR THE FORGIVENESS OF THE ROYAL FAMILY.
“I WRITE THIS IN TEARS AND BEG EVERY GOOD MOTHER TO PLS PLEAD TO MY HUSBAND ( ALAAFIN OF OYO) ON MY BEHAVE TO FORGIVE ME. AND TO ALL THOSE THAT CONTRIBUTE ONE MONEY OF THE OTHER WHEN I GET BACK TO PALACE I WILL DEFINITELY REFUND YOU PEOPLE. THANKS
IT’S FOR THOSE THAT UNDERSTAND THAT THEIR IS NO PLACE LIKE HOME .”
Top Stories