Police React To Abduction Of Six Persons In UNIABUJA


Recall that six people were kidnapped by unknown gunmen during an attack on the University on Tuesday morning. 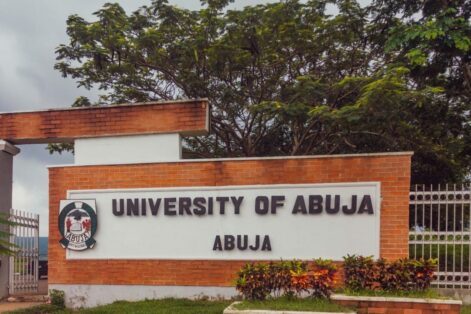 The Kidnap of six persons by armed gunmen who stormed the University of Abuja has been confirmed by the FCT Police.
Recall that the six persons were kidnapped on Tuesday morning.
The University, in a statement on Tuesday signed by its spokesman, Habib Yakoob, said that the gunmen abducted a Professor of Economics in the institution, Joseph Obansa, alongside his two children.
He said the gunmen gained access to the Senior Staff Quarters at Giri in Gwagwalada Area Council of the Federal Capital Territory (FCT) in the early hours of Tuesday.
The school spokesman disclosed that apart from the professor and his children, three persons were also kidnapped.
In a statement released by the command, FCT Commissioner of Police, Babaji Sunday, said at least six members of staff of the University were kidnapped by unknown gunmen.
Sunday stated that additional tactical and conventional policing resources have been deployed to the University’s main and satellite campuses.
The commissioner said he has also directed the operatives to man the staff quarters and other affiliate formations of the university, to fortify security, improve public safety and protect citizens in and around the university community.
He noted that a combined team of the police and personnel of the Nigerian Army 176 Guards Battalion were swiftly mobilised to the area to protect the citizens.
Sunday called for calm, stressing that the security forces are already working with the locals in the area toward rescuing the victims.
The commissioner, however, assured that the perpetrators would be arrested and brought to book.
Top Stories