The chilling murder comes after the couple posed for snaps at a registry office on Wednesday. 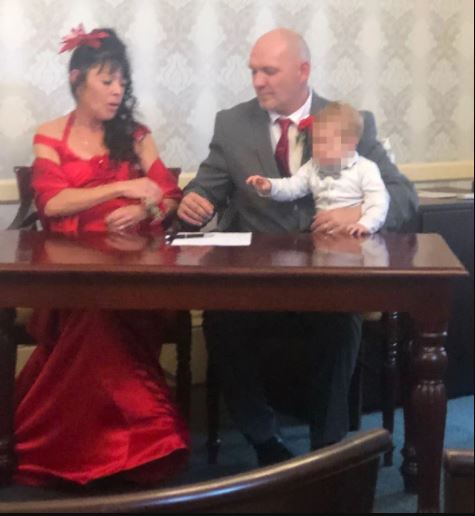 A groom allegedly murdered his new bride just four days after they got hitchedCredit: Ben Lack

Thomas Nutt, a newly-wed groom has been arrested by cops for allegedly murdering his bride, Dawn Walker, just four days after they got hitched.

Dawn Walker, 52, was found stuffed inside a suitcase next to a children's playground on Sunday.

Dawn and Thomas Nutt, 45, got hitched last Wednesday at a register office.

The chilling murder comes after the couple posed for snaps at a registry office on Wednesday.

They were pictured signing the register in Halifax, West Yorks., after an intimate ceremony attended by family and friends.

Dad-of-three Nutt was dressed in a grey suit and red tie whilst Dawn wore a stunning red dress and matching fascinator.

Guests told how the couple had planned the marriage for months after getting engaged in January 2020.

One said: "Dawn and Tommo were so in love. I can’t believe what has happened.

"It was a lovely wedding and Dawn looked beautiful.

"They should have been looking forward to a long, happy life together.

"I just can't believe something like this has happened so soon after the marriage."

Forensics teams were continuing to comb the couple's home in Brighouse, West Yorks., for clues.

Halloween decorations were still hanging from the front door as scrapman Nutt continued to be quizzed by detectives.

Dawn, who had two children from a previous relationship, is believed to have been strangled.

Another wedding guest said: "They'd only got married on Wednesday.

"The ceremony was at 2.30pm and was followed by a reception at a local pub.

"We stayed most of the night. It was a brilliant day and they seemed so happy."

Last night, a West Yorkshire Police spokesperson said: "We can confirm the body of a woman has been found in Halifax.

"A 45-year-old male has been arrested on suspicion of murder and remains in custody at this time.

"Police are not actively seeking any further suspects in connection with the death."