Zamfara State Government shared photo of the one of the residents after he was captured. 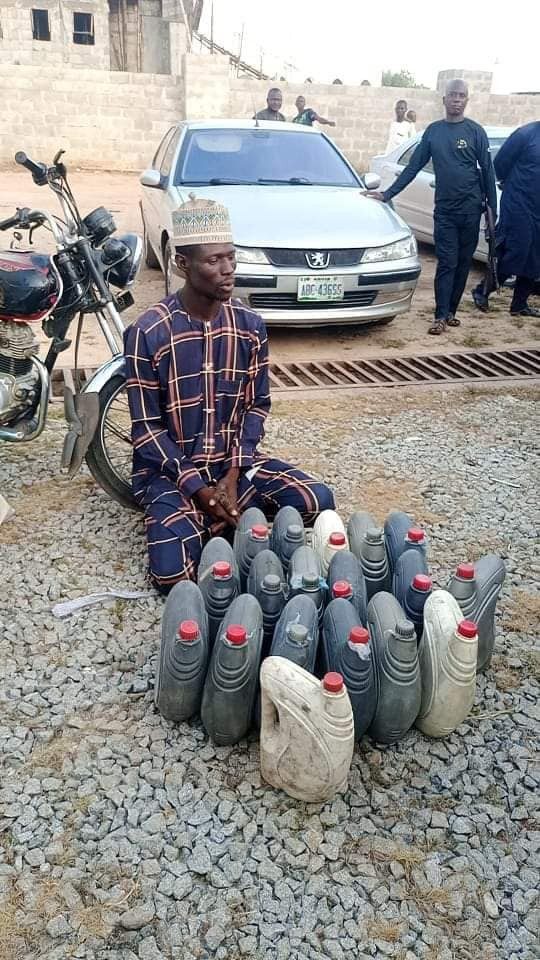 One of the residents supplying fuel to bandits
At least 1,000 residents of Zamfara State Govenrment helping bandits have been arrested and prosecuted.
The government said the residents helped bandits by supplying fuel to them.
Governor Bello Matawalle had issued an executive order banning the purchase of fuel as his government makes frantic efforts to curtail bandits’ violent attacks in the state.
Abubakar Dauran, the chairman of the Task Force Committee on Insecurity, disclosed this while parading a suspected fuel supplier to bandits in Gusau on Wednesday, November 3.
The chairman disclosed that a 42-year-old resident, Zayyanu Bingi, was arrested for buying fuel from different filling stations in Gusau in the past few days.
Mr Dauran said the suspect was arrested while attempting to make his seventh trip to convey gallons of petrol concealed in sacks to the bandits’ camps.
However, Mr Bingi denied supplying fuel to the bandits, claiming that he was supplying fuel to members of his community who were in need.
He said the committee, through collaboration with security forces, also arrested 100 other suspects for alleged involvement in kidnapping, banditry, and providing information to the bandits.
The chairman explained that the security forces were investigating the suspects to ascertain their involvement in the allegations.
"The state government had banned the purchase of fuel and similar products in containers. Many people are found to be using that to supply fuel to various bandits’ camps across the state,” he said.
The chairman said the committee had set up a mobile court to try defaulters of the Executive Order, adding that the defaulters were tried and fined while others were sent to correctional centres in the state.
According to him, the committee has intensified surveillance on fuel supply in Gusau since its inception.
He urged members of the public to continue to expose the bad eggs in the communities to restore peace to the state.
Top Stories