She disclosed that the soldier defiled her at the age of 19 after arriving in Bauchi state for a special operation in 2017. 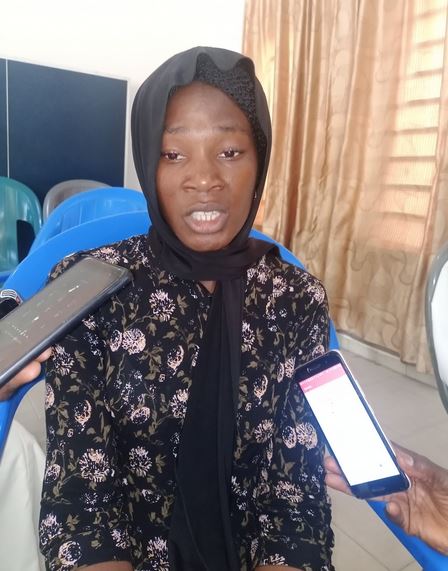 A 23-year-old woman identified as Comfort Peter has opened up on how a Nigerian soldier who was deployed to Bauchi state impregnated and abandoned her after he promised to marry her.

Comfort who is now appealing to the Nigeria Army to assist her in finding her estranged lover who she identified as Sergeant Julius Simon, disclosed that the soldier who she claimed was serving with Biu Regiment of the Army, defiled her at the age of 19 after arriving Bauchi state for a special operation in 2017.

She also claimed that the woman she was working with disapproved of the affair. Comfort who revealed that Simon was 30 at that time, recounted choosing marriage over her education after her father made her chose between the two.

“She told me that if Julius actually loves me then he should come to our house. When I told him (Simon), he agreed and started coming to our house.

“My father said he desired that I go for further studies because I just finished secondary school but Julius promised to marry me."

Alleging that Julius told her father that he had intentions of marrying her, Comfort added that he defiled her shortly after inviting her to his house after claiming that they have completed their assignment in Bauchi and are planning to return to Biu.

She further told journalists she approached at the Press Centre of the Nigeria Union of Journalists (NUJ), Bauchi on Thursday November 4, that she was a virgin prior to this.

“I told him that was not our agreement. He promised to get back to me and take me to live with him. When I came home my father almost killed me for sleeping outside.

“Few days later, I started vomiting. My father noticed and asked my mother. My mother said it was just malaria.”

She revealed that after she realized that she was pregnant, she ran out of the house to her aunt’s house in Tafawa Balewa since her father had been warning his female children that any of them who becomes pregnant in his house would be disowned.

She explained that she visited Sergeant Simon twice in Biu but each time she went, he became furious and threatened not to marry her again.

Comfort also disclosed that since she gave birth to a baby boy in June, 2019, she has not seen the soldier and his telephone number has been switched off.

“I communicated with one of his friends who told me they have been posted to Maiduguri . The friend told me that Julius said he would not marry me again,” adding that she regretted going out with Simon.

“How can you treat someone that you said you love like this?”she asked rhetorically, adding that her soldier lover had cheated her.

Asked what she wants, the mother of one simply retorted that all she wants is justice, adding that the soldier should take responsibility for his child.

“I want justice. Let him come and be a father to his son because the boy is two years old now and has started asking for his father.

“Julius was the one that deflowered me. He promised to marry me but deceived me. I will never love or trust any man again but he must take care of his son."

Comfort who was in company of her father, pleaded with Army authorities to help her to locate the father of her son and also make him take responsibility for the child.

“As for me, l no longer love him. I have forgiven him but won’t marry him again."