In an interview with ABN TV, Stanley explained that the filling station located at Amaekpu Ohafia, Abia State lost N26,300 to the gunmen. 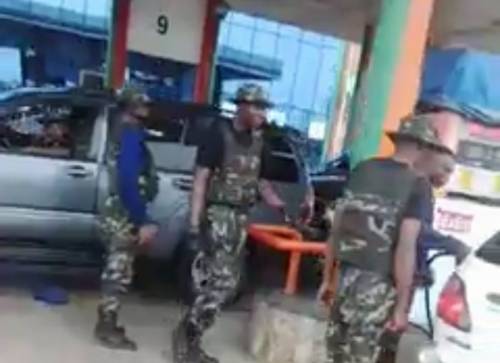 A Nigerian man identified as Chibuike Stanley, who is the manager of Benkama filling station which was invaded some days ago by men of the Biafran National Guard (BNG), has estimated the company's loss in the incident.

In an interview with ABN TV, Stanley explained that the filling station located at Amaekpu Ohafia, Abia State lost N26,300 to the gunmen.

According to him, the gunmen besieged the business premises in a convoy of five cars suspected to have been snatched from their owners along the highway around 8:30 am.

He said he had mistaken the heavily armed men who appeared in military camouflage as security details of a VIP and when they demanded refill of the tanks of the vehicles, the station attendants were eager to do that.

The manager said he however became suspicious of the transaction when they demanded additional fuel in their tank when no payment had been made.

“They asked her to add more. It was in the process of asking her to add more that I asked if they have paid and she said no. I now asked her to go and demand payment. She then asked who is in charge to pay. One of them warned her to keep quiet. It dawned on me that these are not customers,” he said.

The station manager said while he was watching, one of the BNG members went into the supermarket in the station and came out with five packets of biscuits valued at N1,000 each. This is in addition to the total amount of fuel dispensed to them worth N21,300.

The BNG members reportedly attacked members of the Abia State vigilante group who provided guard duty at the filling station and took their two pump action rifles and ammunition.

However, the management of the filling station said apart from being harsh to the petrol pump attendants, the BNG members did not shoot or launch any physical assault in the process.

The Biafran National Guard, one of the groups agitating for the independence of South-East Nigeria, had declared war on the Nigerian government, announcing October 30, 2021, as the independence day of the region.

In videos obtained by SaharaReporters, some armed men who identified themselves as members of the Biafran National Guard were seen saying they were ready for war.

In one of the videos, a man could be heard saying, "The liberation of Biafra has just begun. Today is Day 2 of our glorious week. You can see Biafran National Guards are already on the ground and they are on the move to go and rescue the prisoners of conscience - Mrs Onyekachi Orji and the rest of them.

"This is Biafran National Guards, as you can see them, they are all on alert. You can see they are ready for war, war for the liberation of Biafra has just begun."

The camera further showed armed men in about four SUVs fuelling their vehicles.

The man behind the camera then approached a man in one of the vehicles, identifying him as the Commander, Gen Innocent Orji.

"This is the commander, Gen Innocent Orji. Sir, can you tell us what is happening here?" he had asked the commander.

Orji had replied saying, "We want to tell them that Anambra election can never hold. We are going to declare the sovereignty of Biafra Nation.”

The unidentified man behind the camera had continued, "This is our military. Biafran National Guards are in various vehicles, ready to go and free the prisoners of conscience that have been imprisoned for almost 15 years. You can see them filling their vehicles.

"Saturday, 30th of October is going to be the re-declaration of Biafra sovereignty."

A second video suggests the man with the camera was in a vehicle and gunshots could be heard.

The voice had said, "Biafran National Guards have just met some soldiers; the war has just begun."

The armed men in the videos allegedly had a confrontation with men of the Nigerian Army, leading to the death of one of the BNG members.

Later on October 28, the Director of Army Public Relations, Onyema Nwachukwu, in a statement confirmed the death of one of the gunmen.

According to the statement, the gunmen allegedly attacked troops' location at Amaekpu in the Ohafia Local Government Area of Abia State on Thursday, October 28, 2021.

He added: “The assailants, who were heavily armed and conveyed in several vehicles opened fire on the troops' location, but were met with stiff resistance by the troops. In the encounter, the troops neutralized one gunman, while others abandoned their vehicles and retreated in disarray with gunshot wounds. The troops also recovered a pump-action gun, among others.

“While the criminals withdrew, having been overwhelmed, they were promptly intercepted at Eda by troops of Forward Operating Base Ohaozara in Ebonyi State. The troops recovered additional three vehicles and apprehended one of the gunmen.”