On Tuesday, soldiers from a patrol van reportedly opened fire on some commuters, hundreds of metres away from the local government headquarters. 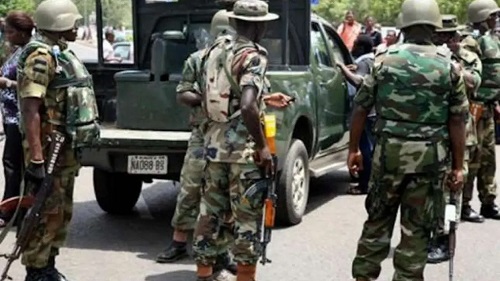 Nigerian soldiers have reportedly shot a middle-aged man in Ihiala Local Government Area, venue of today's supplementary election.
According to FIJ, the incident happened on Tuesday as soldiers were patroling the area.
A crowd had formed around the man, prompting the soldiers to return, firing sporadically again and sending residents scampering for security.
The body of the man was not seen as there are claims that he had been picked up by the soldiers.
Attempts to record the incident were futile, as soldiers forced all commuters to alight from their vehicles and raise both hands to full length.
Recall that the Independent National Electoral Commission (INEC), on Sunday fixed a date for a supplementary election in the council where the governorship poll did not hold at the weekend. INEC also suspended the collation of results for the governorship election.
Ihiala is the only local government area where elections did not hold out of the 21 council areas in the state.
INEC had on Sunday announced results for 20 out of the 21 local government areas with the candidate of the All Progressives Grand Alliance (APGA), Charles Soludo, winning in 18.
INEC National Commissioner and Chairman, Information and Voter Education Committee, Festus Okoye, had announced on Monday that the supplementary election will hold from 10am to 4pm on Tuesday.
Recall that on Sunday, during the collation of results, the collation officer for Ihiala, Ahmadu Umar has claimed there was no election in the area.
He, however, did not state why there was no election in Ihiala.
He said there are 148,407 registered voters in the LGA, adding that the election didn’t take place in Ihiala.
There was a delay in the conduct of the Anambra State governorship election in the local government area of the state.
SaharaReporters had also reported the malfunctioning of the INEC’s Bimodal System machines, BIVAS as well as the tense security situation on Saturday, which affected the turnout and smooth flow of the election.
Top Stories