The suspect who specializes in stealing ATM cards from unsuspecting victims was arrested with 33 cards and a sum of fifty thousand Naira. 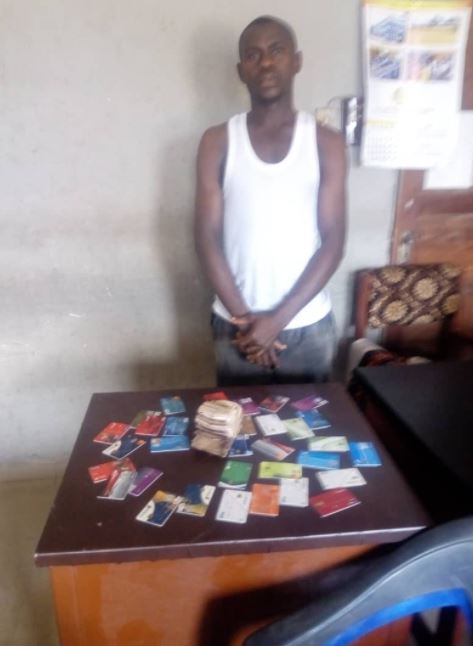 A 38-year-old notorious ATM fraudster, Ojo Amos, has been apprehended by operatives of the Delta State Police Command in Ozoro, Isoko North Local Government Area of the state.

"On 2/11/2021 at about 1300hrs, upon a tip-off that the suspect was seen in a POS Stand located beside a bank in Ozoro branch, the DPO Ozoro Division detailed operatives who swung into action in conjunction with the chairman Olotu vigilante in Ozoro. They were deployed to the scene and arrested the suspect. 33 ATM cards and a cash sum of Fifty thousand Naira (#50,000) were recovered from him," DSP Edafe stated.

The suspect confessed that he stole one of the cards from one Rufai Abdulahi at a bank, in Kwale and left immediately. He said he later withdrew the sum of two hundred and fifty thousand naira (#250,000) from the victim account.

The statement said ,"preliminary investigations later revealed that the suspect usually stays behind his victims at the ATM machine waiting and targeting people who he feels are not too educated, old women/children and once he notice that they are having problem operating the ATM machine, he moves closer to them pretending to be a bank staff trying to help them and in the process he swaps the ATM card,"

The suspect also confessed that he watches them as they enter their ATM pins, memorizes it and after swapping the ATM cards, he uses either a POS stand or ATM machine to empty their bank accounts. He said he has been doing this for the past four years.

The Commissioner of Police Delta State CP Ari Muhammed Ali, while urging members of the public to be law abiding also advice that they learn from the cases regularly reported by the command and also for them to be vigilant when making use of their ATM cards and ensure that only uniform bank staff be allowed to assist them when the need arises.