After several strikes with the bamboo cane, she can be seen falling forward from the pain. 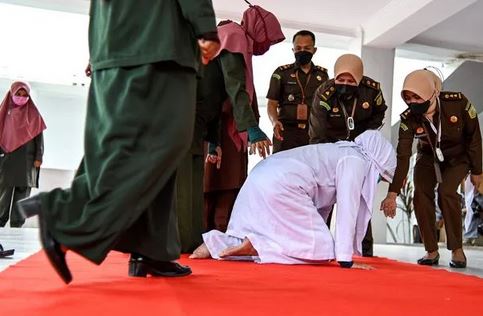 A woman collapsed during a brutal Sharia punishment after she was mercilessly flogged with a cane for having s3x with another man.

The shocking images are from the Indonesian city of Banda Aceh where the unnamed woman was whipped 17 times with a cane along with her partner.

An official, called an Algojo, carried out the beating dressed in a traditional brown gown and their face was covered by a domino-style mask, reported the Daily Star.

The woman receiving the lashings was wearing a long white cloak and head dress as she knelt down in front of the watching public.

After several strikes with the bamboo cane she can be seen falling forward from the pain.

Her partner was seen staring forward at the crowd as he was also flogged.