He stated that dialogue is the only way to stop the insecurity experienced in the country and not offensive attacks by the Nigerian military. 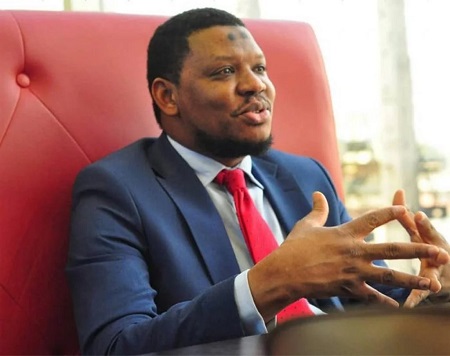 Adamu Garba
President Muhammadu Buhari has been told to dialogue with bandits, Boko Haram terrorists and members of the Indigenous People of Biafra.
The call was made by former presidential aspirant, Adamu Garba.
Garba made this known in a lengthy statement via his Facebook page on Monday.
He stated that dialogue is the only way to stop the insecurity experienced in the country and not offensive attacks by the Nigerian military.
Garba pointed out that insurgency is motivated by a desire for justice or economic survival, asking the federal government to find another way to fight the war against terrorism.
He wrote: “To those who said that negotiations with Boko Haram, Bandits and IPOB is not possible, we should keep bombing and keep losing lives, I say this to you: Where are ISIS in the Levant today? What of Nusra Front, Haqqani Network, Al Qa’ida, Alshabab, AQIM, Ansar Dine, Irish Republican Army etc? What of the Afghan Taliban?
“Ask Russia and Turkey how to they handled ISIS, ask Qataris, Saudis and Pakistanis how they managed to disappear Nusra Front, Qaida and Haqqanis, how did France deal with Ansar and AQIM in Africa, how did Britain ends and contained the IRA or why the American super weapons ended up running away from the untrained, uneducated and ill-organized Afghan Taliban.
“Everything ended up on a negotiation table. The truth is, all insurgencies from history are motivated by two things: desire for justice or economic survival. Nigeria’s case is not an exception.
“We cannot continue to throw bombs in our backyard, to our neighbors, fellow citizens and fellow countrymen and women and believe we are making any progress. This is the clean principle of self-destruction. This is illogical to the modern state governance in the 21st century. It cannot take us anywhere. We must find other means.
“Since the inception of the crisis in 2009, Nigeria burnt $44Bn to kill its fellow citizens and destroy its infrastructure to fight an enemy that simple listening and conversation can solve.
“That amount, the $44bn can dredge River Niger and Benue through the deltas of Anambra and Imo, Build superhighway from Maiduguri to Calabar through Mubi, Yola Jalingo, Wukari, Zaki Biam, Vandekya, Ikom and Ugep, Link Kano, Sokoto, Kebbi to Badagry, through Borgu, in Niger State, and lay gas pipeline and fibre cables from Niger Delta and Lagos to Abuja and Kaduna upward to the hinterland respectively.

“All these burnt away in trying to fight ourselves. That is needless to say that most of these monies we’re either stolen, shared or disappear into the thin air.”
The All Progress Congress (APC) stalwart stated that Boko Haram, bandits, IPOB are all Nigerians and should be treated with dignity.
Garba demanded that the fight against terrorism should be called off, asking Nigerians to fix the various internal differences and disagreements in the nation.
He said: “Believe it or not, Boko Haram, Bandits, IPOB are all Nigerians and our fellow brothers and sisters. We share the same border, live in the same neighbourhood, eat the same food, share the same language and the same tradition and suffer the same way. Whether we kill 10 terrorists today and 1 soldier, we cannot escape the facts that Nigerians killed fellow Nigerians.
“We must look beyond our borders if we must fight an enemy, but we must do all we can to protect our homeland and fix our differences without the sacred blood of our brothers and sisters getting shaded.
“These so-called internal wars against terrorism should be called to a halt and larger table to expand to accommodate our differences no matter our disagreements.
“Let’s call a spade a spade, all terrorist are known by the state, in each country. Nigeria definitely knows who are those terrorists and the real sponsors even though no legal case might have been established against them. We must slow down on the killings, open our country, bury our pride and fix our internal differences and disagreements by mainstreaming a legal framework for a fair position for all.
“The villagers cannot go to the farm, hunger is on the rise, we’re now in a dry season without good harvest, food inflation is very high, the cost of everything is getting unbearable, we cannot afford to keep spending on wars, we must accept our issues and come to terms with the best way out of this by tackling the very basic necessities of our livelihood.
“These wars should be over, let’s work towards peace and prosperity of our people. The desperation, lack of opportunities and better future, hope is more important now than the blood of our fellow citizens.”
Top Stories