IS, which said three suicide bombers took part, with one attack targeting the central police station and another aimed at parliament. 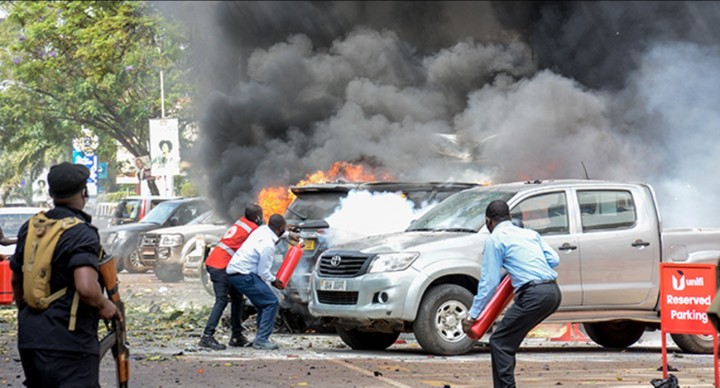 Scene of the incident
The terrorist attack in Uganda on Tuesday has been claimed by the Islamic State group.
The twin suicide bombing took place in the Ugandan capital Kampala, killing three people and leaving several dozen wounded.
IS, which said three suicide bombers took part, with one attack targeting the central police station and another aimed at parliament, made the claim in a statement on its Telegram channels.
Police foiled a third attack, recovering an improvised explosive device from the home of an alleged suicide bomber who was shot and injured, and were in pursuit of other members of the group, police spokesman Fred Enanga said.
Ugandan police have blamed a “domestic terror group” linked to the Allied Democratic Forces (ADF) for the attacks, an armed force active in neighbouring eastern Democratic Republic of Congo.
In April 2019, IS began to claim some ADF attacks on social media, presenting the group as its regional branch — the Islamic State Central Africa Province, or ISCAP.
“Uganda is one of the nations participating in the war against IS in Central Africa,” the IS message read.
Top Stories