Reno made the offer after Garba at an event last Friday said President Buhari should be commended for improving security in Nigeria. 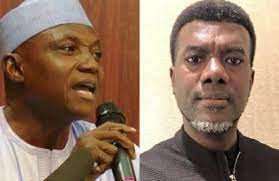 Garba Shehu, the Senior Special Assistant to President Buhari on Media and Publicity, has replied Reno Omokri after he offered him $50,000 to move to Bama without security.

Reno made the offer after Garba at an event last Friday said President Buhari should be commended for improving security in Nigeria.

While reacting to Garba's comments, Reno called on the presidential aide to move to Bama, Borno state without any security aide and he would give him $50, 000.

Bama in a community in Borno state, one of the hotbeds of Boko Haram attacks.

''Yesterday, Garba Shehu renewed his claim that “Buhari deserves credit for tackling insecurity”. I now renew my challenge to Garba. Spend a weekend alone, without security, in Bama, and I will pay him $50k.

Please comment and share so Garba can’t deny seeing this. I am willing to pay the money into an escrow account TODAY or deposit the money with any objective and neutral Third Party of Garba Shehu’s choice.'' Reno wrote

''My message to anyone who made money using Leah Sharibu’s sad ordeal, and they are flaunting it remains unchanged: This is blood money. I don’t need any of it. Period.

Leah Sharibu was among the 110 schoolgirls kidnapped by Boko Haram terrorists in Dapchi, Yobe State on February 19, 2018. Five of them did not survive the ordeal and Leah, a Christian, was not released along with others because she refused to convert to Islam.

There were allegations that he profited generously from the plight of Leah Sharibu. He has, however, denied the allegations, saying all the proceeds from the book and T-shirts were sent to Leah Sharibu’s parents.

FG Decided Not to Remove Fuel Subsidy Not Because It Cares, But Because Of 2023 Elections - NBA President, Olumide Akpata