Woman Hospitalized After Husband Attacked Her Using Machete Before Killing Himself


Njeri sustained three deep cuts into her head and one in her left hand and she is currently admitted at the hospital. 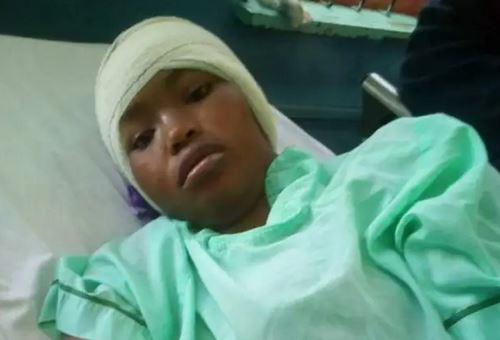 A 25-year-old man, Joseph Kariuki has drowned himself in 60 feet well after hacking his 20-year-old wife with a machete.

The injured victim is fighting for her life at the Moi Teaching and Referral Hospital (MTRH) in Eldoret.

Residents of Chamarel village in Timboroa, Uasin Gishu County, are said to have overheard Kariuki who is a boda boda operator, planning to kill Mercy Njeri.

“Before the incident, Kariuki was narrating to his colleagues how he was frustrated in life and that his marriage was no longer working and he made intentions to kill his wife before taking his own life as well,” a witness Chege Wainaina said.

Stanley Kairu, the father to Njeri, recounted how he advised her daughter not to go back to her house.

Njeri did not listen to her father and insisted to go back and pick her belongings only to fall into the arms of her husband who hacked her.

“Three young men rushed to where I was working at around midday and informed me that my daughter had been attacked by her husband using a machete and that she was bleeding to death,” Kairu said.

Njeri sustained three deep cuts into her head and one in her left hand and she is currently admitted at the hospital.

Police, however, managed to retrieve the body of Kariuki who threw himself inside a 60 feet well at their Chagaiya farm.

His body was taken to MTRH mortuary awaiting postmortem.