The variant was first reported recently in South Africa and has since then been found in 38 countries including France, Germany, Netherlands, Portugal, Australia and others. 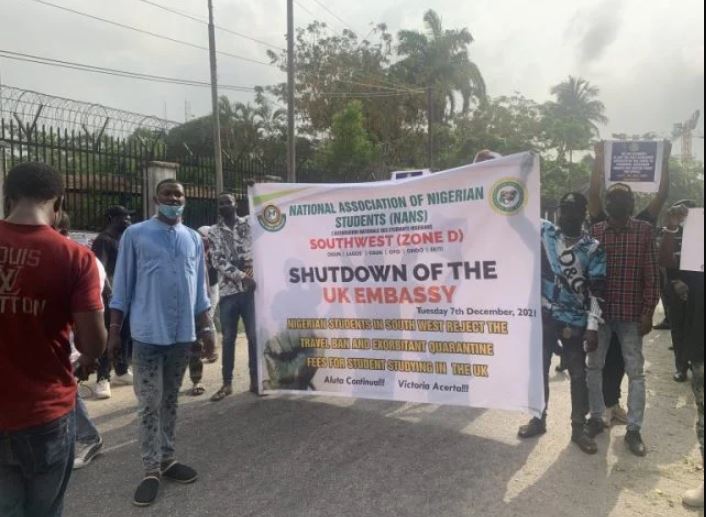 According to the News Agency of Nigeria, the National Association of Nigerian Students (NANS) has given the British Mission in Nigeria 72 hours to rescind its decision to pause the issuance and processing of visas to Nigerians over the discovery of the COVID-19 Omicron variant.

NAN reports that NANS gave the ultimatum during its protest at the British Deputy High Commission in Lagos on Tuesday over the travel and visa restrictions placed on Nigerians over the Omnicron variant of the COVID-19 virus.

“If there is an absence of solutions in the next 72 hours, NANS will have no other choice but to shut down the activities of British and Canadian missions across Nigeria,” NANS said at the protest.

NAN reports that following the discovery of the new COVID-19 variant, Omicron, the British government put Nigeria and other selected African countries on the red list.

The variant was first reported recently in South Africa and has since then been found in 38 countries including France, Germany, Netherlands, Portugal, Australia and others.

Chairman, NANS Ogun Chapter, Kehinde Damilola, told NAN during the protest that the association was displeased with the decision of the British government to place a ban on travels from Nigeria.

According to him, the decision is pure racism and an attempt to intimidate African countries, particularly Nigeria.

“We have come to say enough is enough with the treatment Nigeria constantly receives from Europe. The narrative has to change because Nigerians are not a symbol of havoc or hazard.

“This decision will affect not only visitors but also our international students who are studying in the U.K.

“The omicron variant did not emanate from Nigeria, neither do we have up to a dozen cases so why should we be punished for it even over other European countries?” he said.

The student leader urged the British mission in Nigeria to look into the situation without delay, adding that the exorbitant quarantine fee for students and visitors should also be revoked.

Also, NANS South-West Coordinator Adegboye Olatunji, said that COVID-19 was not an African virus neither was the new variant, Omicron.

“Placing a ban on only African members of the Commonwealth is not right.

“We should be thinking of solutions on how to eradicate the virus and vaccinate Africans instead of coming up with red lists.

“We have thousands of students studying in the U.K. who have plans of returning to Nigeria for the festive season but their plans have been cut short.

“We are not here to fight anyone, neither are we here to cause havoc,” Olatunji said.

He added that NANS was ready to take the mantle to fight relentlessly for Nigerians studying abroad.

NAN reports that policemen and other security agents were on ground at the British Deputy High Commission to prevent any security breach.

Speaking with NAN, an official of the British mission, who did not disclose his name, told NAN that audiovisual recording of the protest had been forwarded to appropriate authorities to address the issue.

“We will be relating happenings to the Deputy Head of Mission who will, in turn, make calls to London.

“That is where we are going to take it from because we can’t make instant decisions,” he said.