Man Tries To Kill Himself By Climbing A Telecom Mast In Rivers...You Won't Believe Why


Godfrey had climbed a telecommunications mast at the Garrison axis of Port Harcourt on Tuesday and threatened to hang himself when residents got him distracted and rescued him. 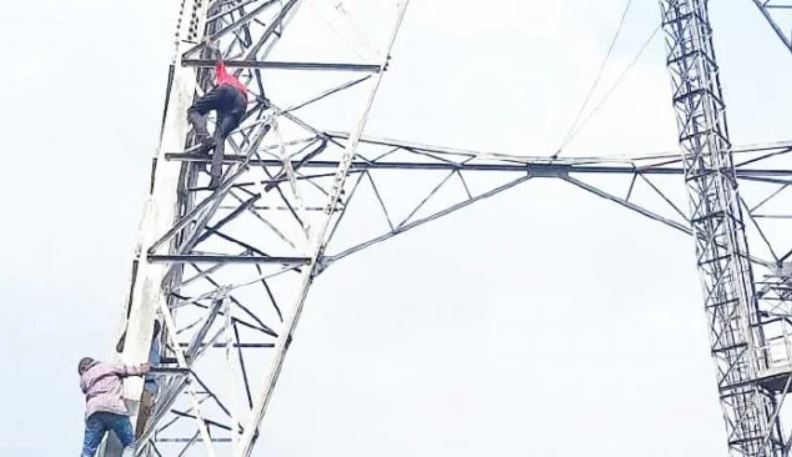 Egbe Godfrey, a middle-aged man, who claimed to have lost all his savings to a trading firm, MBA Trading and Capital Investment Limited in Port Harcourt, Rivers State, has been arrested by the police for attempting suicide, The PUNCH reports.

Godfrey had climbed a telecommunications mast at the Garrison axis of Port Harcourt on Tuesday and threatened to hang himself when residents got him distracted and rescued him.

MBA Trading and Capital Investment Limited, operated by one Maxwell Odum, collapsed due to his inability to pay investors agreed return on investment.

Thousands of the victims had staged protests three times to demand a refund and also called for his arrest.

Godfrey, after he was rescued, said life had been tough for him since he lost all his money to the forex company, adding that he could no longer cater for his family.

He stated, “My money has been seized by Maxwell Odum. He ran away with my money for over one year now. Since then, I have not seen him.

“I am frustrated; my family is frustrated because I cannot take care of them. I cannot train my children and pay school fees. My landlord has thrown me outside. I don’t know where to start life.

“I don’t have a job. There is nothing I am doing. That was why this morning I decided to come here to hang myself.”

Some eyewitnesses, who spoke to our correspondent, narrated how they spotted the victim and persuaded him to come down from the mast.

“The man said he wanted to kill himself because of the money he lost to MBA.

“He said the government was not helping them to recover the money and the victims had gone to the EFCC office to report the case, but nothing was done,” an eyewitness said.

A businessman in the area, who did not want his name in print, said, “He went up there with a rope. He tied the rope there to hang himself.  We begged him until he managed to come down.”

The excitement that the victim did not hang himself was, however, truncated when some policemen arrived and got him arrested.

A spokesman for the state police command, Nnamdi Omoni, did not answer several calls put across to his mobile phone.

He had also yet to reply to a text message sent to his mobile phone as of the time of filing this report.