In a recent viral video, Mr. Ezeaku had queried why the man of God gives celebrities money instead of healing their ailments. 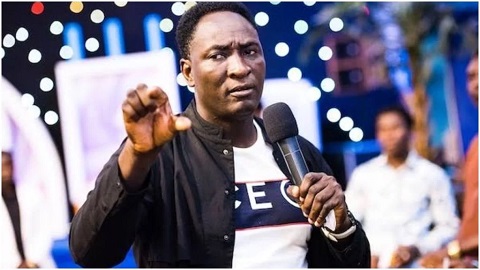 Fufeyin
Popular man of God, Prophet Jeremiah Omoto Fufeyin has said he has forgiven one Mr. Mathias Ezeaku for calling him a fake prophet.
Ezeaku, the founder Igbos Love Themselves Foundation had questioned the man of God on why he gives celebrities money instead of healing their ailments.
He accused the man of God of having no healing powers.
However in response to the malicious and unfounded lie and accusation against him, the man of God who doles out cash to the needy said he does not have the little known Mr. Ezeaku in his mind, urging him not to entertain fear anywhere he is.
Prophet Fufeyin further said he was worried by calls coming in from different individuals and groups, appealing to him to forgive Mr. Ezeaku.
In a video release, the man of God said it has become important to forgive the offending Mr. Ezeaku, noting that he (Fufeyin) is not God but a mortal.
"I want to say that Jeremiah Fufeyin has nothing to do with Mathias. Mathias where ever you are, don't be afraid. I have nothing to do with you. I am a man of God, in the manner that I have to forgive. I have forgiven you from the bottom of my heart" he said.
Quoting from the Holy scriptures, Prophet Fufeyin said forgiveness is divine, adding that it is God's injunction that men should love one another as God has loved them.
He noted he has no power to change what God has directed, maintaining that it is a command he has to obey.
Watch video below:
Top Stories