The Imo-based footballer, while speaking with BBC, disclosed that he doesn’t see the age difference. 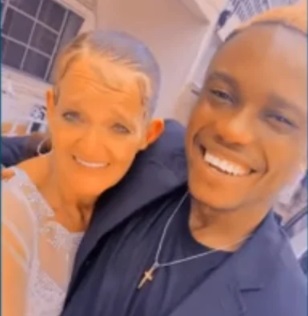 Sean and his wife
A Nigerian man, Sean Imonioro Chukwuemeka has revealed what his marriage is like after tying the knot with 54-year-old white woman.
The 26-year-old Imo-based footballer, while speaking with BBC, disclosed that he doesn’t see the age difference.
Chukwuemeka said he met his spouse on Facebook, proposed to her online, and eventually married her.
“As a 26-year-old boy who married a 54-year-old, I don’t see the age gap. She’s like my age mate and best friend. She has three kids, two of which are a twin she adopted before she birthed the her son now aged 18,” he said.
“Marrying an older person, the trust and respect is there. She doesn’t rub her seniority in my face. We have our differences, yet, she calms down when she wants to talk to me. This is unlike what a Naija babe will do.
“I’m a footballer and I play for a local team in Owerri. I run a POS money transfer, deposit, and withdrawal business. We met via Facebook in January 2020.”
Chukwuemeka said many people have accused him of marrying for benefit. He also disclosed that his wife had hit menopause.
“When I proposed to her online, she asked if I was sure of my love for her. She said she was ready if I’m willing to go down this path. She said she liked the way I gave her attention. She gives me what I want in a woman,” he added.
“People tell me she’s hit her menopause but I didn’t believe that would be a problem, given how much I love her. Some think the marriage is for benefit. The benefit is that I married someone who gives me peace of mind.”
Watch video below:
Top Stories