While pleading for clemency, he pointed out that he was released from Correctional Centre four weeks ago after being arrested by officers of Rapid Response Squad (RRS). 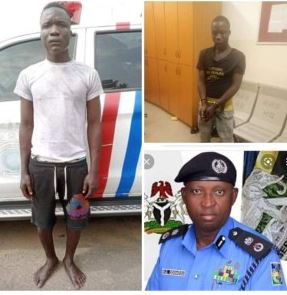 Officials of Lagos State Rapid Response Squad (RRS) have arrested an 18-year-old traffic robber after he went into robbery again to raise funds to pay the debt he incurred after he was released from prison four weeks ago.

The robber, Sodiq Abubakar, 18 years old, was arrested by Rapid Response Squad (RRS) around 8:00 p.m. on Friday in Ketu shortly after using an unidentified object to threaten a motorist, and thereafter dispossessed him of his N7,000 in Ketu traffic.

Abubakar explained that he borrowed some money shortly after his release from the correctional centre to procure drugs. He added that when his creditor became too persistent, he resorted to traffic robbery to rake up money to offset the debt.

Working with an accomplice identified as Ahmadu, now at large, Abubakar stated they threatened to smash the side glass of their victim if he failed to release the money in his pockets. He added that their victim coughed up N7,000, which they shared immediately.

While pleading for clemency, he pointed out that he was released from Correctional Centre four weeks ago after being arrested by officers of Rapid Response Squad (RRS).

He noted that he met Ahmadu at Otedola Bridge and they decided to rob in traffic. Their victim had immediately alerted RRS officers close to the scene and arrested him not far from the spot while Ahmadu escaped.

Abubakar revealed that he was arrested in Ketu for traffic robbery on 16th June, 2021 and he was sentenced to three-month imprisonment.

He said on 19th September 2021, he was arrested again in Alapere for traffic robbery by RRS patrol team but transferred to Alapere Divisional Police for prosecution.

According to him, he was sentenced to some weeks in prison. He said that he was released four weeks before his third arrest near Ojota Bridge.

He has been charged to court on the directive of the Lagos State Commissioner of Police, CP Hakeem Odumosu.