Ejiofor, in his reaction to the DSS Public Relations Officer, Peter Afunanya’s statement on Tuesday, stated that Kanu was being mentally tortured, while describing the DSS account as “blatant falsehood.” 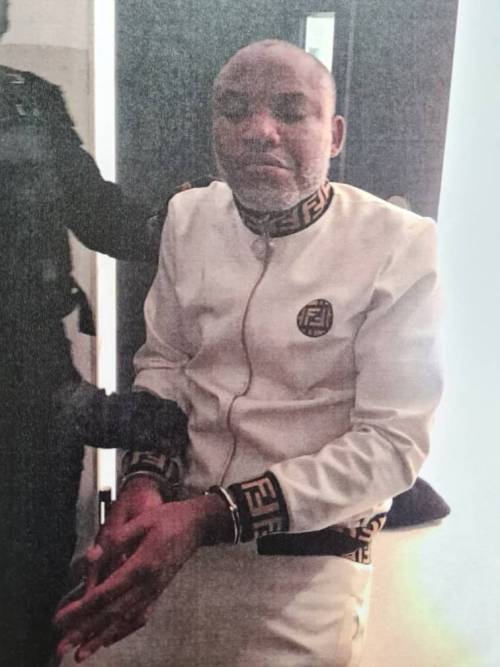 The leader of the Indigenous People of Biafra, Nnamdi Kanu's lead counsel, Ifeanyi Ejiofor, has reiterated that the Department of State Services (DSS) subjects his client to torture in detention.

Ejiofor, in his reaction to the DSS Public Relations Officer, Peter Afunanya’s statement on Tuesday, stated that Kanu was being mentally tortured, while describing the DSS account as “blatant falsehood.”

In a statement obtained by SaharaReporters on Wednesday, Ejiofor said, “Our position was to initially ignore the blatant falsehood deliberately dished out to the public by the DSS spokesperson, Mr Afunanya. But in view of the damage, the intended result will achieve, it is now compelling that we set the records right.

“(1) From Mr Afunanya’s analysis, it is evident that he is not even familiar with the extant provisions of the Anti-Torture Act 2017, a law every law enforcement official/personnel have sworn to protect. Our Client - Onyendu Mazi Nnamdi Kanu need not be subjected to daily beatings and flogging by the personnel of the DSS before he can be qualified as being tortured – No.

“Section 2(b)(iv) of the Anti-Torture Act 2017, defined torture to include: (b) Mental or psychological torture, which is understood as referring to such cruel, inhuman or degrading treatment calculated to affect or confuse the mind or undermine a person’s dignity and morale, such as (iv) Confinement in solitary cells against their will or without prejudice to their security.

“This very law Mr Afunanya swore to protect also prescribes punishment of 25 years imprisonment upon conviction for personnel of any of the Security Agency found to be in breach of this Law. Section 8(1) of the Anti-Torture Act 2017 provides as follows: A person who contravenes section 2 of this Act commits an offence and is liable on conviction to imprisonment for a term not exceeding 25 years.

“We were unable to find in any place throughout his statement where Mr Afunanya clearly denied the fact that our Client - Onyendu Mazi Nnamdi Kanu is not subjected to 23 hours daily solitary confinement.

“(2) In his desperate effort to deny the obvious, Mr Afunanya stated that our client is allowed the opportunity of daily changing of his clothes. This is a blatant falsehood. Apart from his lawyers, and persons who have visited him in custody, this fact can be verified from a highly respected man of God, Bishop Sunday Onuoha, who can confirm that on the two occasions he visited Mazi Nnamdi Kanu at the DSS facility, he was putting on the same cloth (joggers - up and down). Our client has not changed this cloth since June 2021 he has been in the DSS facility till date.”

Ejiofor added, “The Fendi cloth he was putting on at the time he was abducted in Kenya is the only cloth he has several times worn to court, the general public can attest to this fact. This is despite our plea to the authorities concerned that his clothes should be changed.

“(3) It is pertinent to inform the public at this juncture that even our Client's family voluntarily bought his prayer shawls and the holy book, which items meant for prayers were submitted for the detaining authority's scrutiny but they vehemently rejected the items and consequently returned them to us, insisting that they will procure the said items for him.

“Till date, the DSS has woefully failed and/or refused to provide our Client with these items, even when the Court recently ordered that our Client be allowed to practise his religion.

“(4) The fact that our Client’s potassium level is depleted, which is a serious medical condition that the medical department of the DSS is struggling day and night to address is beyond denial.

“Onyendu's blood sample has been drawn for well over 21 times for laboratory examinations but till date, no solution is in sight. Their trial and error has continued unabated.

“Is Mr Afunanya by his position telling us that we, his Lawyers have no right to inform the public about the medical state of our Client? The answer is No. We cannot hide anything from the World, particularly when it is evident that our Client is being persecuted for offences he never committed.

“(5) To be very fair to the DSS, from June 2021 when our Client was taken into custody up until 10th November 2021, when he was openly threatened in court by one of the DSS personnel that escorted him to court, our Client never complained to us that he was either being poorly fed or starved.

“However, since that officer boasted in open court that he would deal with Onyendu during the altercation, which threat was captured in a short clip, they started feeding him with poorly prepared food, and later graduated to starving him. If they have reverted back to the status quo, it may be after we raised alarm, but this is still subject to confirmation.”

“We find it very incomprehensible to believe that a supposedly responsible Agency of the Federal Government such as the Department of State Service, notable for their indiscretion to court pronouncements, instead of taking steps to address the serious issues we are raising concerning the ill-treatments being meted out to our Client, deliberately issued a statement fully known to them to be total falsehood?

“If we may ask, what are they trying to achieve by deceiving the public? This and many other questions are begging for answers. Let Mr Afunanya deal with these questions,” the lawyer added.

Like Tinubu, Gov Umahi Informs Buhari Of His Ambition For 2023 Presidency
Popular Stories