Taiwo made the denial after the Police Command in Ogun state accused him of conniving with his wife to commit the crime. 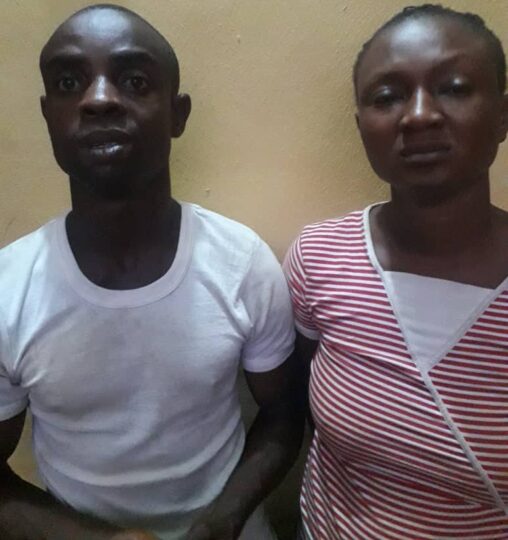 The couple
Pastor Peter Taiwo has said he didn't r*pe a 16-year-old choirgirl. He however admitted having s*x with the teenager.
According to him, both of them were in love.
The 16-year-old is member of his church in Alaja Oke, Saje area of Abeokuta, the Ogun State capital.
Taiwo made the denial after the Police Command in Ogun state accused him of conniving with his wife to commit the crime.
The church has been locked since the police arrested the pastor and his wife Elizabeth Taiwo.
However, the pastor and his wife have narrated their side of the story.
According to BBC, Pastor Taiwo said he and the 16-year-old girl fell in love with each other.
He said: “I told her to run away from her boyfriend and ask me anything she needs”
Taiwo said he got closer to the girl after she sustained a leg injury.
According to him, he assisted the girl and her parents by paying for her treatment and also praying for her.
He said this brought them closer to the point that the girl has access to his bedroom.
Taiwo said: “She comes to my bedroom, we talk, we chat together. One day when she came in the morning for the treatment of her leg, I call her inside to see her leg, I didn’t know the spirit that came over me as I was checking her leg.
“From that day, she began to send me I love you message and I reply her. I still have the messages on my phone.”
He said they never had s*x during the period but they were in love.
“The time we started, we didn’t have sex but we love each other. Sometimes when she comes, I will tell her to peck me, sometimes we go romance,” Pastor Taiwo added.
The pastor added that he finally had s*x with the girl and told his wife to help him beg for forgiveness.
He said: “Wen we get sexual dis tin, na dat time I tell my wife say I don do something bad. I tell my wife to epp me beg am as me sef dey beg am.”
However, the pastor’s wife, Elizabeth Taiwo, said she was not aware of her husband’s sexual relationship with the girl.
She said they have been married for about 15 years with three children.
She noted that her husband was a bricklayer before he became a pastor five years ago.
Elizabeth said the incident happened after her husband called her to tell the girl to come and run an errand for him.
She said she noticed that the girl was inside for too long, only to find out her husband had defiled her as she walked in to check what was going on.
According to BBC Pidgin, Elizabeth said: “It was about three weeks ago on Wednesday, my husband asked me to call her to come to meet him inside that he wants to send her on an errand, but when I notice she was inside for too long I went inside but to my surprise, I saw the bloodstain on our bed and the girl crying, that was when I realized my husband had defiled her.
“I shouted, cried, and wanted to escalate the matter but my husband begged me not to expose the girl.”
Top Stories