Kogbagidi had people pack Portable’s belongings and said he should be returned to his village in Sango Ota, Ogun state. 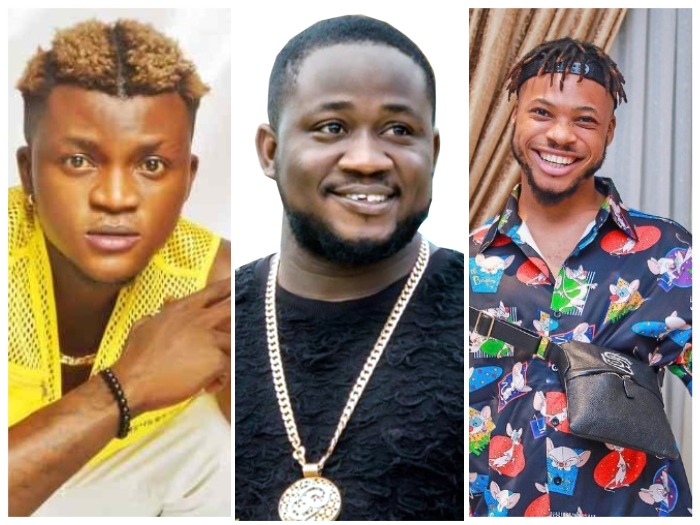 Portable, Kogbagidi and Poco Lee
Rising Zazu crooner, Portable has been pursued from the house of his benefactor, Kogbagidi.
International show promoter, Kogbagidi, sent the rising star packing after he called out popular dancer Poco Lee on social media for withholding thousands of dollars Wizkid sprayed on him during a recent concert.
Kogbagidi, had people pack Portable’s belongings and said he should be returned to his village in Sango Ota, Ogun state.
In a video shared on the promoter’s page, he was heard asking the Zazu star if he ever collected a dime from his hand despite all he had done for him. Portable confirmed that Kogbagidi had truly not collected money from him.
Kogbagidi then asked Portable why he was then worried about the money with Poco Lee. The promoter added that the Zazu star did not have a single bit of common sense and told those around him who tried to plead to lead the singer out of his premises.
Portable was heard protesting in the background and claiming that they were sending him packing now that the Zazu song was reigning. Kogbagidi added that he needed his space and the Zazu singer should be taken away. He also said if the singer had been monitored, he wouldn’t have called out Poco Lee online.
In the caption of the post, Kogbagidi wrote:
“Unruly and unprofessional conduct is always expected from upcomings .You never can tell what goes on in their mind or head. Am shocked and embarrassed at this point. Do I need to fix your career and your head at the same time ?”
Watch video below:
Top Stories