When they arrived, the policemen reportedly asked the organisers to remove the banner in the interest of peace. 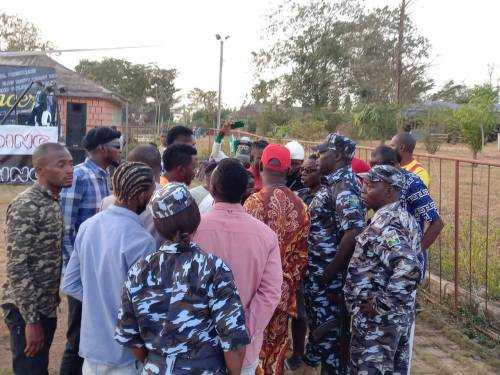 According to a report by SaharaReporters, a detachment of armed policemen has arrived at the S BASE Garden located at Lokogoma in the Federal Capital Territory, Abuja, the venue of a music concert tagged “Freedom Concert” in an attempt to disrupt the event.

SaharaReporters learnt that the policemen arrived in a Hilux van and were invited by the owner of the garden who became uncomfortable with the banners with inscriptions, “#NorthIsBleeding #BuhariIsSleeping” displayed near the stage.

When they arrived, the policemen reportedly asked the organisers to remove the banner in the interest of peace.

The police also maintained that they were not at the venue to stop the concert but to ensure that the organisers respected the opinion of the owner of the garden.

The situation led to an altercation between the police and organisers as the youths insisted that they had paid for the venue and the owner could not dictate to them what to display and not to display.

They said the message in the banner was the reality of what was going on in the Northern region and President Muhammadu Buhari must rise up to the occasion and address the security challenges in the country.

They said the message was clear and they had no apology displaying it as backdrop.

The management of the garden thereafter disconnected the electricity supply to the venue in an attempt to frustrate the concert.

SaharaReporters learnt that human rights’ activist, Omoyele Sowore, who arrived amid the brawl, later intervened and engaged the owner of the garden and the policemen.

The matter was thereafter resolved with parties reaching an agreement.

As at time of filing this report, the light had been restored and the artists were back on the stage.

The concert which was aimed at using music as a weapon to fight oppression and tyranny brought together artists and activists such as saxophonist Samuel Gabriel, guitarist Seth Ogahi and several cultural troops in the city.