It was gathered that the former Station Officer was dismissed from the force over the missing pistol and died of a heart attack because of the stolen pistol. 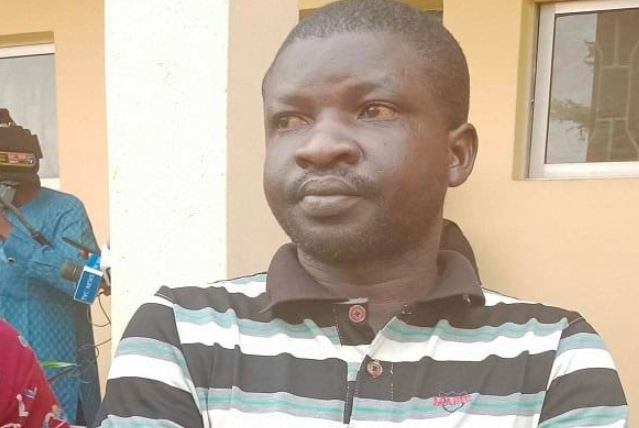 Haruna Yusuff, a Police sergeant, has opened up on how he sold a service pistol to suspected cultists in Kwara State.

The suspect said that he stole the pistol from the former Station Officer in charge of Omu Aran Divisional Police Station, Ehigimetor, Ileso area of the State.

It was gathered that the former Station Officer was eventually dismissed from the force over the missing pistol and died of heart attack because of the stolen pistol.

Haruna was arrested by operatives of the Inspector- General of Police Intelligence Response Team ( IRT), Oshogbo, following a report that some suspected cult members were coming from Kwara State to unleash mayhem on Osun State

"I joined the police as a constable in 2008. I am from Benue State, but I have been serving in Kwara State ,since I was enlisted. I was first posted to Omu Aran Division and later transferred to other divisions in Kwara, but I am now back in Omu Aran. I don’t steal, but I don’t know what came over me. I saw the pistol at the mosque and took it away.

“I can only say that I am sorry. Out of the two arms that I sold to the cultist, one belonged to the Omu Aran Divisional Police Station while the other one was locally-made. That one that belonged to the division, I saw it outside of the mosque behind the police station and took it.

"I didn’t know that it belonged to the SO, It was about three years ago. I got the locally made pistol in Venue State. The person who sold the second gun to me is dead now. We went for a burial and he was talking about selling it and somebody directed him to me .I bargained with him and bought it from him.

"When I picked the police gun it didn’t occur to me to take it to the station despite the fact that I know that it was not valuable to me. I didn’t know what I was going to be using it for. I don’t know what actually came over me. I mistakenly sold the gun.

"Before God and man, I have never been involved in any selling or stealing of gun before. The SO is late now. Later I heard that the division was looking for the gun. I was afraid to recover it from the person I sold it and hand it over to the armourer.

"I sold the guns to a Disk Jocker ( DJ) in my area. He has a shop around the Traffic Junction in Omu Aran,where I serve .I didn’t know that he was a cult member. I sold the locally made pistol to him at N25 000 and the English pistol at N47000.

On how he felt when the late SO was being tried for the missing pistol, the suspect said:

"Before God and man, when the trial process was going on. I was not at the division. I was not aware. I only knew that he was arrested. I feel very sorry for him. I learnt that he died of heart break because of my offence. I am so sorry.

On his own confession, Eze said, “I am 33 years old from Enugu State. I am a DJ and I also sell phone accessories at Traffic Junction. I bought the guns from the police officer for self – defence, because of the nature of my work.

"I bought the two guns from him and later I discovered that I could not use that police pistol. I sold the two to Rector, who is a student of Kwara State Polytechnic. I didn’t want to lose my money and somebody connected Rector to me. I know Sergeant Haruna at the Traffic Junction, where my shop is. He is always there to control traffic. I have never used the gun for any operation. I just bought it for self defence."

A police source, however, said that the Eze is a strong member of the Aiye Confraternity in Omu Aran despite the fact that he is not a student of any higher institution of learning in the state.

Olalekan, popularly known as Rector, a student of Kwara State Polytechnic and one of the leaders of Aiye Confraternity in the school, in whose possession some of the arms were recovered, said that he bought the arms for the Temple– the code name for the assembly of Aiye members.

The Sagamu Ogun State born suspect confessed to being a cult member and claimed to have been initiated into the cult by a former student of the school, who had promised to help him ..

"I am 23 years old. I am from Sagamu in Ogun State. I am a student of Kwara State Polytechnic. I am studying Business Administration. I am a cult member. I am a member of the Neo Black Movement of Africa popularly known as Aiye Confraternity. I am the Foreman for Aiye in Kwara Polytechnic. I have not killed anyone in my life. We bought the guns for the Temple for self defence. Since we bought it, we have not fought with any group," he said.

"I have been a member since 2016 I was introduced to the cult group by a senior school mate, David. He is no more in Nigeria now. I didn’t know him before. He just walked up to me and said that he wanted to help me .That was how I was initiated."

The Osun State Commissioner of Police, Wale Olokode, confirmed the arrest of the police Sergeant and the cult members to newsmen.