The building was said to have caved in through the children section, trapping scores of worshippers, including children, who were attending the service. 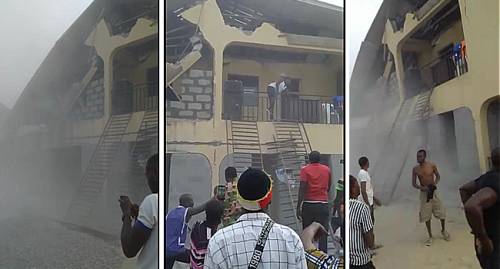 No less than 18 persons have been rescued from a collapsed church building belonging to the Salvation Ministries in Asaba, Delta State.

SaharaReporters had on Tuesday reported that no fewer than 10 persons were confirmed dead as a building housing Salvation Ministry, Okpanam, Oshimili North Local Government Area of Delta State, collapsed.

The building was said to have caved in through the children section, trapping scores of worshippers, including children, who were attending the service.

The collapsed building also trapped an unspecified number of worshippers.

The building, which is being used for the first time, reportedly collapsed at about 5:55pm during Tuesday evening's service.

The rescued have been taken to yet-to-be identified hospitals in the state capital.

However, the rescue efforts were still going on at the time of this report. It is believed that many more were still trapped under the collapsed structure.

The spokesperson of the police in Delta State, Bright Edafe, who confirmed the rescue of the 18 persons, said no death has been recorded so far, and that children and adults WEre among those rescued.

The rescue operation is led by the officials of the Delta State Emergency Management Agency, fire service and the police.