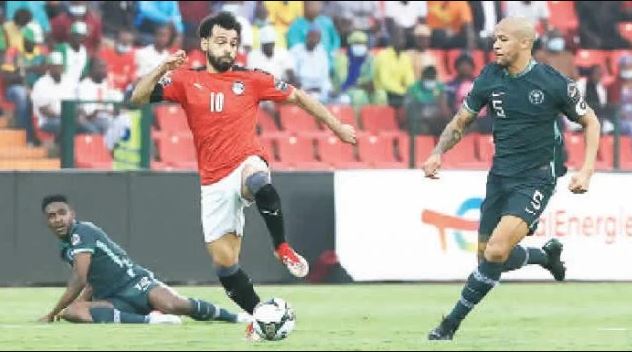 He said this during a post-match interview after Nigeria defeated Egypt 1-0 on Tuesday.

The coach commended the gallantry of the Super Eagles, saying the good performance will be replicated in subsequent matches.

He said, “Egypt is a well respected team; we respect them, but we’ve players who should be respected too.

“We tried to cut Salah off the ball, and we tried to keep the ball.

“We gave everything during the match, and we must play every game as if it were a final. We won the first match, and we will see what we do in the next.”

Eguavoen and his Super Eagles’ wards faced a stern examination of their credentials when Nigeria and seven-time AFCON champions Egypt went for each other’s jugular in the opening match of Group D of the 33rd AFCON on Tuesday.

The venue was the 30,000–capacity Stade Roumdé Adjia in the northern Cameroonian town of Garoua at 5pm.

Three precious points was the reward for the Eagles, as they look forward to their second match of the competition against Sudan’s Falcons of Jediane on Saturday.

The match marked Nigeria’s 94th match at the Africa Cup of Nations, and her 51st win, having drawn 22 matches and lost 21. On their part, it was Egypt 101st match at the AFCON, during which they had won 57 matches, drawn 17 and lost 27.

Nigeria is led to AFCON 2021 by Augustine Eguavoen, who was on-field captain when the Eagles won the title in Tunisia in 1994, and then coached the Eagles to third place in Egypt 12 years later.

In 2004, he was assistant to Coach Christian Chukwu when the Eagles picked up the bronze medals in Tunisia.

Soft–spoken but tactically astute, Eguavoen is the only man to have coached Nigeria to win all three group phase matches at the AFCON – when they defeated Ghana, Zimbabwe and Senegal in Port Said at the 2006 finals in Egypt.

His team also bundled out Cup holders Tunisia after a pulsating penalty shootout in the quarter-finals.