The couple has been arrested and charged with kidnapping, armed robbery and attempted murder. 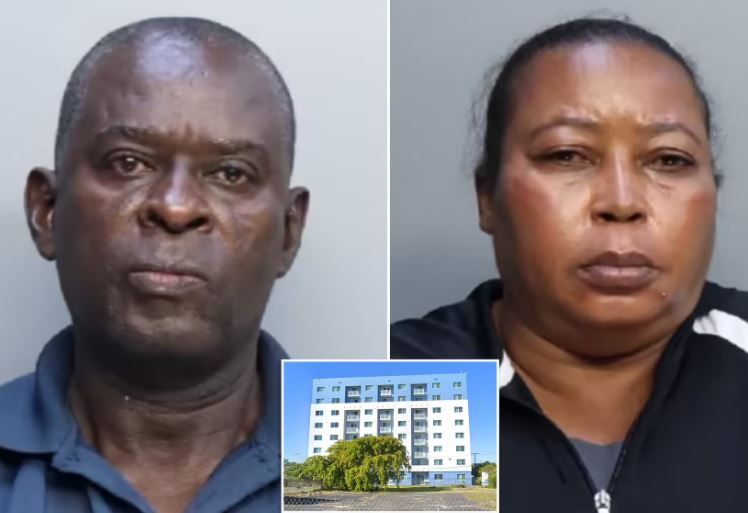 A couple has been arrested for allegedly abducting and holding a man hostage, as well as torturing him for three days before he escaped.

Miami Police said that on December 28, Marie Dorsainvil, 52, contacted an unidentified victim and asked him to give her a ride to her apartment and then for him to go up with her.

Police said the victim, who said he knew Dosainvil since February 2020, hesitated because they were both married to other people, but was convinced when Dorsainvil told the victim her husband was in Haiti, CBS Miami reported.

Once inside the apartment at Villages Apartment homes the victim sat on the couch and was tied up by the arms and legs by Marie's husband Occius Dorsainvil, 56, when he entered the apartment with a gun.

For the next 72 hours, the victim was chained up and held against his will at gunpoint, according to Miami Police arrest forms.

The duo allegedly demanded $50,000 in cash from the victim and repeatedly threatened to shoot him and torture him, police said.

Police said the suspects forced the man to rehearse and record a statement admitting to having an affair with the 52-year-old. They also told him that if he went to the bathroom, they'd force him to eat it, and if he refused, they'd shoot him, CBS Miami reported.

The victim told the couple that he didn't have $50,000 to give them, but he would sign his vehicle title over to them on December 30 if they set him free.

On December 30 the 56-year-old suspect forced the victim to shower at gunpoint and made him drink a bottle of alcohol so that if he got pulled over by police he would say he was driving him home because he had too much to drink and not believe anything he could possibly say, police said.

Once inside the car, Occius made the victim drink a bottle filled with bleach and Haitian rum as they drove to where his car was parked, telling him 'Do not throw it up or spit it out or I will shoot you. Chug it all,' police said.

The victim then pretended to be drunk and laid back in the front passenger seat and when he opened his eyes twenty minutes later, the suspect was gone, the report said.

That was when the victim asked for help from pedestrians to call the police.

One good Samaritan, who witnessed the victim's escape, old WSVN.com: 'Somebody came out of the vehicle running towards me, and he looked like he was shot or stabbed, but it actually was just blood from the vomiting that occurred.'

The victim was taken to the University of Miami Hospital for treatment and has since been released.

A week later the suspects were arrested and charged with kidnapping, armed robbery and attempted murder.