CAF announced this on its website after AFCON 2021 group stage, saying that its Technical Study Group shortlisted the Best of the Group Stage. 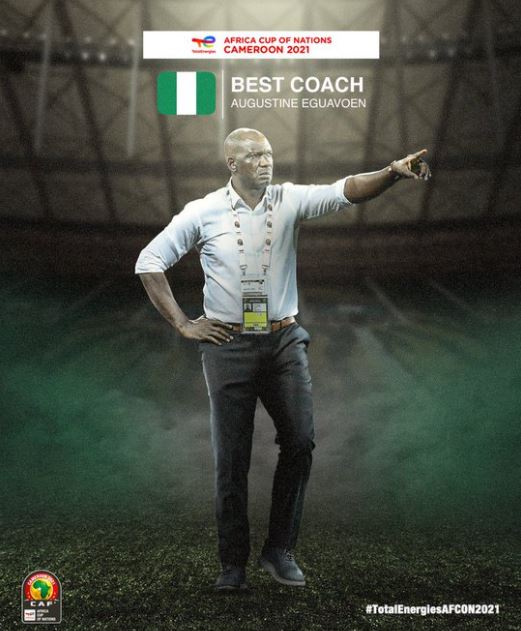 Super Eagles interim boss, Augustine Eguavoen, has been named the Group Stage Best Manager at the ongoing AFCON 2021 in Cameroon by The Confederation of African Football (CAF).

The 56-year-old led Nigeria to three straight victories against Egypt, Sudan, and Guinea Bissau in Group D. In doing so, Eguavoen who won the 1994 edition as a player, equalled his own record set in 2006 as a coach.

CAF announced this on its website after AFCON 2021 group stage, saying that its Technical Study Group shortlisted the Best of the Group Stage. He was awarded for winning the three matches at the group stage.

Eguavoen-led Nigerian team have been outstanding at the ongoing Africa Cup of Nations.

In a statement on his handle, Eguavoen said, "Many thanks to the Confederation of African Football for this award.

"The Best coach of the Group stage. Wouldn’t have been possible without my fantastic group of players and colleagues.

''Thank you Nigerians, for your support. It’s needed now, more than ever."

Cameroon striker, Vincent Aboubakar was awarded player of the first round after scoring five times for Cameroon, while Egypt’s Mohamed Elshenawy was the goalkeeper of the group stage.

Guinea’s IIaix Moriba was selected Young Player of the first round. 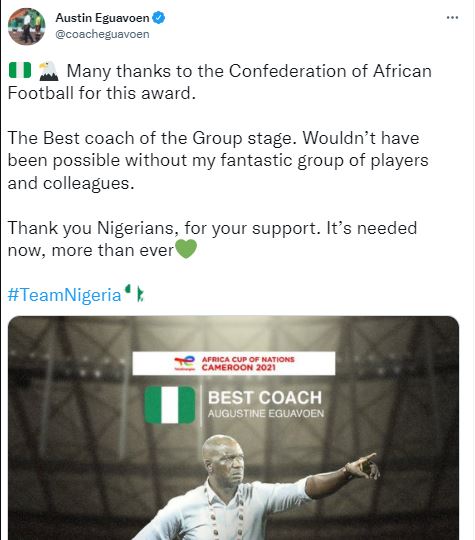