The stool of Olu of Ikeja had been vacant for nine years following the demise of Oba Rauf Matemi, Amore 1, who joined his ancestors in October 2014. 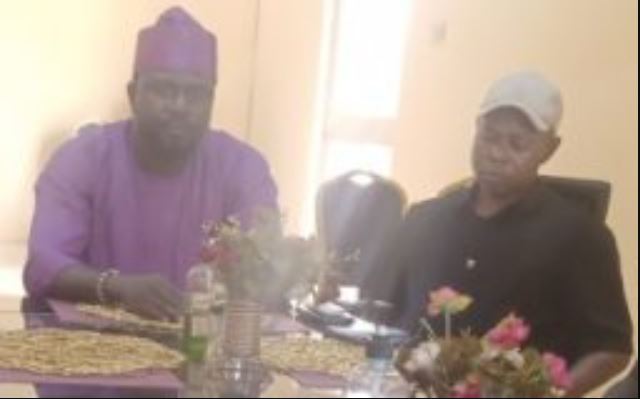 The Oluwo of Ikeja Land, Chief Adeniyi Illo and Prince Jamiu Folami, during the news conference on the kingship crisis in Ikeja Kingdom.

According to a report by The PUNCH, the royal families in Ikeja, the capital of Lagos State, have kicked against the nomination of 33-year-old Temitope Ibikunle as the king-designate for the vacant stool of Olu of Ikeja.

Ibikunle, who is of Oshoja Ruling House, was a youth representative on the now-defunct Lagos State Judicial Panel of Inquiry on Restitution for Victims of SARS Related Abuses and Other Matters.

The stool of Olu of Ikeja had been vacant for nine years following the demise of Oba Rauf Matemi, Amore 1, who joined his ancestors in October 2014.

Speaking at a news briefing on Friday in Ikeja, leaders of some of the royal families and kingmakers in the kingdom, said that Prince Tajudeen Muritala, who had earlier been unveiled as the king-elect, remained the sole candidate for the throne.

The Oluwo of Ikeja, Chief Adeniyi Illo and Prince Jamiu Folami, who spoke on behalf of others, accused politicians of blocking the progress of the area by sabotaging their efforts at installing the king-elect.

They said that the issues should not have degenerated to what it is at present, with the different royal families antagonising one another, if politicians had not infiltrated the families.

Folami, who denied the claim that Muritala was not a member of any of the royal families, provided an oral historical record that linked him to Iyade and Oshoja families.

The kingmakers called on the state government to ensure that the will of the indigenes of Ikeja Kingdom prevailed, by approving the installation of Prince Muritala as the new king.

Specifically, the Oluwo of Ikeja land raised the alarm that his life was in danger owing to his stance on the issue.