In the video which was recorded by a female student in Ibadan showed the man driving the commercial bus, which had been improvised to suit him. 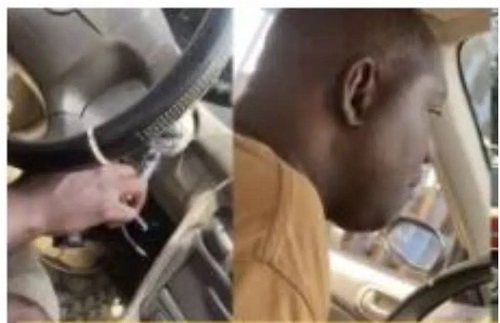 A man has left tongues wagging on social media after he was seen driving without legs in Ibadan, Oyo state.
The man who is living with physical disability works as a commercial driver.
However, it was discovered that he customized the vehicle in a way that will allow him drive the car.
Some social media users commended him while others didn't approve of it.
See reactions below:
dorimevibes wrote; “This is commendable. I applaud the man’s effort for wanting to work for himself but this particular job is really dangerous both for himself and the passengers. It will be better to find another hustle.”
iam_austin_wrote; ‘God bless him!!! But make he park first make I come down…. I no wan die young!!!!”
skii_raba1 wrote; ‘This is fucking risky, no be self respect or hardwork be dis..’
Kingcalls wrote; “I recently entered an uber that was driven by a woman…she said its unfortunate that most women want to do prostitution…and that the men she carries encourages her but the women she carries tells her stuffiness they can introduce her to big men that will give her better money thru massage parlours whr they will end up having sex with her but she will be making about 50k per session… instead of her stressing herself driving uber…”
slay_with_cycyjaybags wrote; ”Make him park Abeg, i can stay in this kinda of car, what if something happens? why put people’s live on a risk?”
Josywhyte wrote; “While some guys with complete legs and hands will be complaining instead of looking for a little hustle. They will be blaming God and some people for their problems.”
Watch video below: