Omole, who noted that she left a three-month-old baby before travelling, said she was pressured by her mother to undertake the journey. 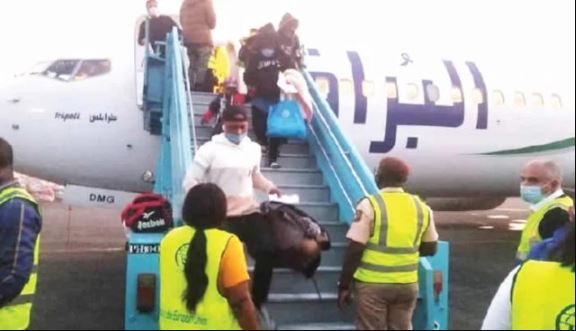 Omole, a Libyan returnee, has blamed her mother for her trafficking to the North African country, The PUNCH reports.

Omole, who noted that she left a three-month-old baby before travelling, said she was pressured by her mother to undertake the journey.

The victim was one of the 128 returnees received by the National Emergency Management Agency on Tuesday around 6.32pm at the Murtala Muhammed International Airport, Lagos State.

Omole, 29, said she was not ready to visit her mother yet.

She said, “My mother was approached by a street sister who sweet-talked her to convince me to embark on the journey to Europe so that I could take care of her.

“I had to obey my mother by embarking on the journey when the pressure became unbearable. I left my three-month-old son behind in my mother’s care and I have not seen him since then. He should be six years old now.

“My trafficker paid for my journey from Nigeria to Libya, which started on February 26, 2016. Before leaving Nigeria, my trafficker had informed me that I would refund the money spent on me for the journey though she did not tell me the amount.

“I ended up paying her N2.2m by engaging in prostitution throughout my six-year sojourn. After this, my initial trafficker sold me to another Burga (trafficker). I paid N1m to the new man, all the payments were through prostitution.

“Coming to Nigeria now with only N200,000 that I squeezed to save, I don’t want to see my mother till I have enough.”

Another returnee, identified only Blessing, said she was deflowered on her first day in Libya after she was trafficked from Akungba, Ondo State.

Blessing said she was trafficked to Libya by a woman who promised to get her a hairdressing job to take care of her mother and siblings.

She said, “A popular big sister at Akungba approached my mother and convinced her that she would help me travel to Europe with the promise that I would be doing my hairdressing work or I could be a housemaid to be able to raise money and support my mother and siblings.

“My mother was not feeling well and she needed support. I was the second to the last child in the family. My elder siblings could not be supportive because of their economic status.

“I left Nigeria on January 3, 2016, and the cold was at the extreme peak at the time. My journey through the desert was horrific; I fell sick and I was about to be buried; the grave had been dug and just as I was about to be thrown into the grave, I miraculously showed signs of life as I was told and I came back to life.

“What I experienced in the desert was a child’s play compared with the inhuman treatment meted out to me by my Burga (trafficker) who happened to be from my town and same street. Despite the fact that I was sick as a result of the harsh weather in the desert, my trafficker forced me to be deflowered on the day I entered Libya by fixing me up with a client.

“I used my body to pay my trafficker a total sum of N4.5m. The worst part of my experience was the mental instability I found myself in; this was due to various traumas I passed through in the hands of my trafficker. Any time I had to shout out of anxiety or anger, the mental illness would resurface.”

The victim added that out of the nine victims the trafficker took out of their town in Akungba, she was the only one who returned to Nigeria.