Mohammed Noor told court he was under firm instructions to steal two mobile phones, property of an Officer Commanding Station (OCS) in Samburu. 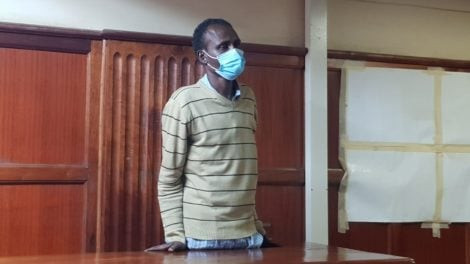 Noor
A 47-year-old man has alleged that he was instructed by Satan to steal a phone from a police vehicle.
This comes after he was arraigned at the Milimani law courts in Nairobi, Kenya.
Mohammed Noor told court he was under firm instructions to steal two mobile phones, property of an Officer Commanding Station (OCS) in Samburu.
Noor pleaded guilty to stealing the phones owned by Adan Shukri, a police officer.
"Satan instructed me to steal the phones from the police vehicle. Satan is strong and influential,” said Noor.
The OCS who is stationed at Suguta Police Station in Mar Mar Samburu county was in Nairobi for official duties.
Noor allegedly stole the gadgets from a Police Land cruiser vehicle on February 27, 2022, at Tahmeed bus stage along river road in Nairobi.
On that day, Police officers from central police station were on patrol when they came across a suspect who had been arrested by members of the public.
They re-arrested the suspect, one Mohammed Noor, who was in possession of two mobile phones and took him to central police station.
Details were retrieved from the mobile phones and the owner was contacted by the investigating officer.
“He was contacted and confirmed that his private phone and his National telecommunication service phone had been stolen in a police land cruiser at Tahmeed stage while booking a ticket to Kwale on official duty and had reported the matter at Central police station ” read the report in part.
Noor pleaded guilty before Nairobi Senior principal magistrate Bernard Ochoi and pleaded for leniency saying it was Satan who told him to steal.
"Mzee I pray for forgiveness it's Satan who led me to the police Landcruiser and told me to steal the phones, “he lamented.
When the magistrate asked him where he met Satan he confirmed they met within Nairobi when he was a visitor.
He further told the court that he has a wife who is admitted in hospital upon delivery of their child and asked the court to give him a last chance promising not to repeat the offence again.
The prosecuting counsel James Gachoka asked the court to release the phones to the OCS since they belong to the national military.
The magistrate ordered a pre-sentencing report to be filed in court before sentencing Noor.
Top Stories