The suspect confessed to the crime stated that he had a passion for joining the Police but failed before turning to crime. 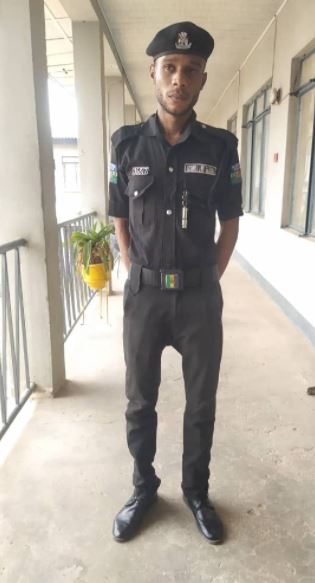 A man posing as a police officer to dupe unsuspecting members of the public using fake alert has been apprehended by the Kano State Police Command.

Spokesperson of the command, SP Abdullahi Haruna Kiyawa, who disclosed this in a statement on Monday, March 7, said that the suspect, Yusuf Abdullahi, has confessed to the crime.

"On the 03/03/2022 at about 1330hrs, complaints were received from three people of different addresses within Kano Metropolis, that sometimes in January 2022, someone wore Police Uniform with name tag "Abdullahi Sarari", went to their shops, made purchases of goods worth One Hundred and Four Thousand Naira (N104,000:00), collected their bank account details and claimed to have respectively made transfers to their various bank accounts," the PPRO stated.

"Though they did not receive an alert of the payments and learned that he was in Police uniform, they entrusted him, collected his mobile phone number, and allowed him to go. Since then, he has not been picking up their calls and hence, they reported to the Police

"On investigation, the suspect confessed to the crime and further stated that he had a passion for joining the Police, tried many times, and failed in exams; he then met his tailor and saw Police Uniform which he used to intimidate and defraud members of the public.''

Meanwhile, the Commissioner of Police, Kano State Command, CP Sama’ila Shu’aibu Dikko, ordered for discreet investigation, after which case will be charged to court for prosecution.

He further warns that criminals will have no hiding place in Kano State. They are advised to either repent or leave the State altogether. Otherwise, they will be arrested and face the full wrath of the Law.

He thanked the good people of Kano State for their prayers, encouragement, continuous support, and cooperation.

He urged residents to pray for the State of the Nation and report incidences to the nearest Police Station, and not to take laws into their hands.

Rigorous patrol and raids of criminal hideouts and black spots will continue throughout the State, as the Command will sustain the ongoing “Operation Puff Adder.”, the CP added.