Medical Trip: No Communication To National Assembly As Buhari Says Osinbajo In Charge


The President had on Sunday said Osinbajo would be in charge while he is away in London on a two-week routine medical check-up. 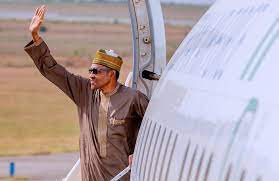 Even though he said the Vice-President, Prof Yemi Osinbajo (SAN), is in charge of the affairs of Nigeria during his medical trip to the United Kingdom, the President, Muhammadu Buhari, did not officially notify the National Assembly of any transfer of power, The PUNCH reports.

At the Senate and the House of Representatives on Tuesday, being the first plenary day after Buhari embarked on the trip, the presiding officers did not read any communication from the President regarding the transmission of power.

When contacted to confirm if there was a communication from the Presidency to the National Assembly on Buhari’s trip, an official of one of the liaison offices who did not want to be mentioned said “none.”

The President had on Sunday said Osinbajo would be in charge while he is away in London on a two-week routine medical check-up.

Buhari said this just before his aircraft, Nigeria Air Force 1, took off from the Presidential Wing of the Nnamdi Azikiwe International Airport, Abuja, at about 2 pm on Sunday.

When asked if his absence won’t affect state functions, he said, “Well…I cannot claim to be doing the work alone. The government is fully represented. The Vice-President is there. Constitutionally when I am away, he is in charge. And then the Secretary to the Government (of the Federation, Boss Mustapha) and the Chief of Staff (to the President, Ibrahim Gambari) are also there. So, there is no problem.”

Meanwhile, Section 145(1) of the 1999 Constitution prescribes that ‘Whenever the President transmits to the President of the Senate and the Speaker of the House of Representatives a written declaration that he is proceeding on vacation or that he is otherwise unable to discharge the functions of his office until he transmits to them a written declaration to the contrary such functions shall be discharged by the Vice-President as Acting President.’

Since Buhari and Osinbajo came into office on May 29, 2015, the President has transferred power to the Vice-President thrice officially.

In February 2016 when Buhari embarked on a five-day vacation, he transferred power to the Vice-President.

The President did the same thing in June 2016 when he went to London to treat an ear infection.

In January 2017, Buhari wrote to the National Assembly to notify the federal parliament of his 10-day leave and transfer of power to the Vice-President.

The President’s leave was from January 23 and February 6 or 10 working days.