Upon arrest, the suspect led the police to his house where seven (7) computers were recovered. 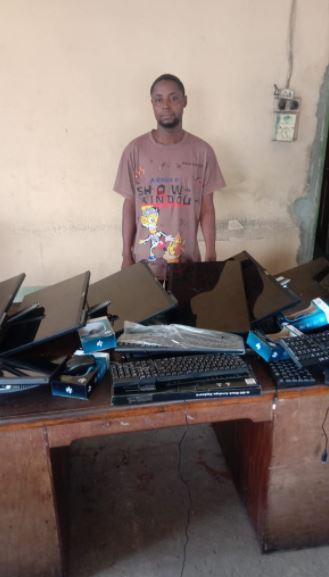 A staff of Nana Primary School has been arrested by the police for allegedly stealing eight (8) out of fifteen (15) Zinox computers supplied to the school by the Delta State Government.

A statement released by DSP Bright Edafe, spokesperson of the state police command, said the school authorities had on March 2 reported that the computers were stolen.

He said upon receipt of this report, the DPO ‘A’ Division Warri detailed police detectives who swung into action.  The detectives after a painstaking investigation, on 6/3/2022, arrested the principal suspect named Oki Precious ‘m’ age 34yrs.

The investigation later revealed that the suspect is the computer operator working in the school and employed by the parent-teachers association (PTA) of the school.

The suspect led the police to his house where seven (7) computers were recovered.The case has been charged to court.