Buhari’s aircraft arrived at the Presidential Wing of the Nnamdi Azikiwe International Airport on Friday evening. 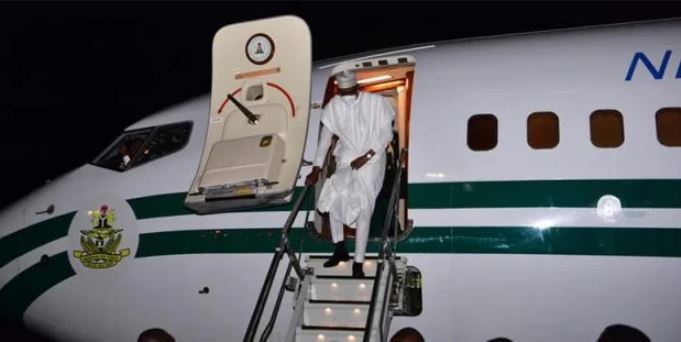 Nigeria's number one man, President Muhammadu Buhari, on Friday night returned to Abuja from his routine medical trip to London, the United Kingdom.

Buhari’s aircraft arrived at the Presidential Wing of the Nnamdi Azikiwe International Airport on Friday evening.

Buhari had left the country for a two-week medical trip on Sunday, March 6.

The president who was earlier scheduled to leave for London from Nairobi, Kenya, where he attended the 50th anniversary of the United Nations Environmental Programme, changed course when he returned to Abuja on Friday, March 4.

In a statement he signed on March 1, the Special Adviser to the President on Media and Publicity, Femi Adesina, said the President would proceed from Kenya to London for “routine medical checks that will last for a maximum of two weeks.”

He, however, left for London on March 6.

Shortly before his departure, the President affirmed that the All Progressives Congress is capable of getting its act together and conducting its national convention on March 26.

However, the Buni-led Caretaker/Extraordinary Convention Planning Committee underwent a purported shakeup that saw the emergence of Governor Abubakar Bello as acting Chairman.

The President who later intervened called party stakeholders, especially the Governors elected on the platforms of the APC to desist from utterances and actions that could further disunite the party ahead of the National Convention.

This came after Buhari met with the CECPC Chairman, Mai Mala Buni on Wednesday.

Following the meeting, the President, in a letter addressed to the Chairman of the Progressive Governors Forum, Governor Atiku Bagudu of Kebbi State, asked the governors to sheath their swords and rally behind Buni for smooth conduct of the national convention.

The President’s London trip, which lasted less than the proposed two weeks, may have been cut short due to party issues to be resolved before the convention, which holds in about a week.