Yakasai was suspended from office in October 2020 and sacked in February 2021. 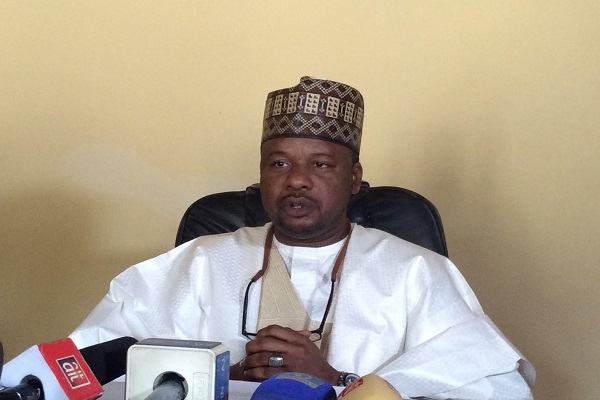 Salihu Yakasai has dumped the All Progressives Congress.
The Special Adviser on Media Matters to Governor Abdullahi Umar Ganduje of Kano State, Salihu Tanko Yakasai, who was sacked for criticising President Muhammadu Buhari administration announced his exit from the ruling All Progressive Congress (APC) on Monday.
Yakasai was suspended from office in October 2020 and sacked in February 2021, following his utterances against the government in power which he was part of.
He alleged that during his struggles, he come under attacks but was fortunate to survive the “arrows and bullets.”
“I survived arrows and bullets shot at me by evil forces in both the real and virtual worlds,” he stated during a press conference at the NUJ Press Centre, Kano, on Monday.
“I have been a bonafide member of the All Progressive Congress (APC) party of Nigeria right from its inception almost a decade ago.
“But I have reached a point in my life where I have decided to embark on a new political journey to ensure that I stick to my beliefs and principles.
“It is in this light that, after due consultation with my political mentors, constituents, friends and family, I resolved to exit the APC. My membership of the party ceases from today, March 21, 2022,” he said.
Yakasai said he served to the best of his ability during his days as Director-General of Media and Communications in Government House and later Special Adviser to the Governor on media, adding he has no regrets but came away with many lessons.
“During the period I improved the image of the state government, and effectively networked with citizens groups to project a positive image of our state on the national scene,” he said.
He narrated while projecting the image of government in the state and at the centre, he was equally mindful of the campaign promises made to the people as a party, which he stated “the APC leadership nationwide have fallen short of those promises.”
He explained: “I travelled to different parts of the country to campaign for the party at the local, state and federal levels. I stuck out my neck, risked my life, gave my word and trust, and extended my belief in a party we thought in 2015 will usher in the leadership that will answer the cry of millions of Nigerians.
“But as I solemnly committed myself in December 2000 when I made my first entry into partisan politics, I will not just speak truth to power, I will try and live the truth that I speak no matter the cost.
“It was in that spirit that I vehemently criticised the PDP led government prior to 2015. It will be hypocritical of me today to keep quiet when our own APC government and party have underperformed.
“I made several attempts to highlight some of these failures from the inside, but unfortunately amends were not made, and those in power were averse to my corrective steps. Consequently, l was suspended and sacked from office.”
Yakasai said he remains grateful to Governor Ganduje for giving him a platform to serve for over five years.
Top Stories