The video has sparked reactions online as many debated the intentions of the young man. 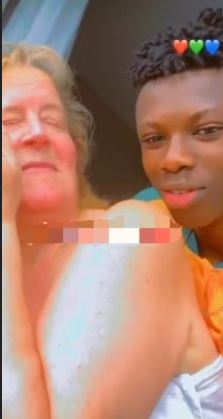 A video that captured the moment a young man and his older white girlfriend were loved up has sparked mixed reactions online.

The white lady who looked rather older than the young man was quite shy of the camera as she clung to the him.

The video has sparked reactions online as many debated the intentions of the young man with some deploring the relationship, saying that the lady is old enough to be his mum.

sterlynwrighter wrote: “Operation secure the bag and your future 😂😂😂”

_theonlytina wrote: “it’s the fact that she’s shy for me”