The match ended 1-1 with the Black Stars qualifying for the 2022 World Cup in Qatar on away goals rule. 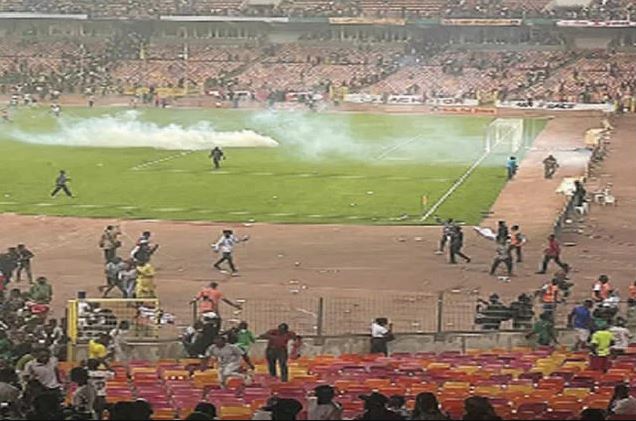 The chaos at Abuja stadium

The East African nation of Zambia has confirmed the death of its football official in Nigeria, a situation that could expose Nigerian football to FIFA sanctions.

The Football Association of Zambia confirmed the death of Joseph Kabungo, a CAF/FIFA medical officer, in Abuja after Tuesday’s World Cup qualifier second leg between Nigeria and Ghana.

The match ended 1-1 with the Black Stars qualifying for the 2022 World Cup in Qatar on away goals rule.

FAZ President Andrew Kamanga said: “Today we mourn the passing of our CAF/FIFA medical officer Dr. Joseph Kabungo who was on duty as a Doping officer in Tuesday’s match involving Nigeria and Ghana, and we extend our sincere condolences to Dr. Kabungo’s family and the football family at large.”

The cause of death remains sketchy even though some reports suggested that the fracas after the match caused by the pitch invasion could have led to Mr Kabungo’s death.

The FAZ president did not state the cause of death in the post but noted, “We take note that it is too early to dwell into the nitty-gritty of the cause of his death but will wait for the full report from CAF and FIFA on what exactly transpired.”

The venue of Tuesday’s encounter was the newly refurbished MKO Abiola Stadium and with the gates thrown open, was full to its 60,000 capacity.

There was much optimism from Nigerian fans after the Eagles forced the Black Stars to a 0-0 draw last Friday in Kumasi and many expected the Eagles to stamp their qualification.

Kamanga continued: “Dr. Kabungo was a permanent fixture at football events including the FIFA Arab Cup in Qatar which is a precursor for the 2022 World Cup. He was also part of the medical team during the Cameroon 2021 (played in 2022) Africa Cup of Nations.

“He was one of the outstanding Zambian football personalities that flew the Zambian flag at global football events. We all have to learn from his example of excellence and celebrate his legacy by breeding more hard-working football Zambian administrators.”

In some comments under the Facebook announcement, some Zambians showed their anger at the perceived Nigerian negligence in Mr Kabungo’s death.

Mevis Mwanza wrote: “A very big loss to the football medical community, and Nigeria should be banned with immediate effect,” to which John Mukoboto added, “This is very sad for our Country. We hope Nigeria will be banned even for 5 years.”

FIFA’s Stadium Safety and Security Regulations state, “LOCs/event organisers, associations and clubs/stadium authorities must take all reasonable measures necessary to ensure safety and security at the stadium. LOCs/event organisers, associations, and clubs/stadium authorities are responsible for the behaviour and competence of the persons entrusted with the organisation of a FIFA event.

The organisation of Nigeria versus Ghana match on Tuesday, March 29 violated a number of FIFA security regulations. FIFA states that “Security checks shall be carried out on persons and vehicles at the entry points of the outer and inner perimeters,” which was not the case as many fans walked into the MKO Abiola Stadium without any cursory check from security officials.

The abiding thought was just to get the stadium filled to capacity. The organisers may not be able to accurately tell anyone the actual number of fans that attended Tuesday’s match.

Also, FIFA adds: “The field of play must be protected against intrusion by unauthorised persons. Where unauthorised access cannot be controlled by stewards and/or police officers, stadium management may erect a fence, a suitable moat that prevents intrusion, or a combination of the two.”

The Nigeria Football Federation (NFF) and the Ministry of Youth and Sports have yet to make an official statement about the death, which if it was caused by security violations could have dire consequences for football in Nigeria.