Recall that scores of passengers onboard the Abuja-Kaduna train were killed while some were kidnapped as bandits attacked the train.

The National Drug Law Enforcement Agency has arrested a notorious drug cartel operating at the Murtala Muhammed International Airport.
NDLEA following the arrest, recovered millions of naira.
Read the statement below:
A string of fresh offensives against drug cartels across Nigeria has led to the arrest of a fleeing drug kingpin heading a syndicate operating at the Murtala Muhammed International Airport, MMIA, Ikeja Lagos and six other members of his gang. A professional methamphetamine (Mkpuru Mmiri) cook and a lawyer were also arrested in Owerri, Imo state and Ado Ekiti, Ekiti state respectively.
The Lagos airport drug syndicate was behind the smuggling of 1, 584,000 tablets of Tramadol seized on Tuesday 15th March by NDLEA operatives in collaboration with Aviation Security (AVSEC) and Customs service personnel at the airport. The seizure includes 17 cartons of 250mg Tramadol branded as "Tamra" weighing 669.70kg and five cartons of 225mg Tramadol under the brand name "Royal" with a gross weight of 217.15kg.
The psychotropic substance, which was imported into the country from Pakistan was smuggled through the airport tarmac using one of the vehicles of the Skyway Aviation Handling Company (SAHCO) and was intercepted at the Federal Airports Authority of Nigeria (FAAN) Personnel Yard. Two suspects: Ofijeh John Mowa, a SAHCO driver and Nyam Gazu Alex who is a security guard with the Nigerian Aviation Handling Company (NAHCO) were initially arrested in connection with the seizure.
Further investigations by NDLEA operatives however led to the arrest of five other persons involved in the crime including the ringleader, Yunana Fidelis who fled Lagos to Kaduna the moment their lid was blown open. Others include: Adesanwo Temitope; Owoseni Taiwo Temidayo; Fasoranti Shola and Bamigbade Jonathan.
Yunana Fidelis who is also a staff of NACHO had escaped and fled to Kaduna after depositing Nineteen Million Eight Hundred Thousand Naira (N19, 800,000.00) cash with a BDC operator to be paid later into his bank account.
After tracking him for days in Kaduna, on Friday 25th Fidelis relocated to Abuja where he was eventually arrested by NDLEA operatives at 7pm on Sunday 27th March while he was trying to collect One Million Naira (N1, 000, 000.00) cash from an undercover agent who posed as a BDC operator. In addition to recovering the cash Fidelis deposited with the BDC operator in Lagos, the Agency had also placed a post no debit order on his identified bank accounts.
Meanwhile, a professional methamphetamine (Mkpuru Mmiri) cook, Reuben Bekweri, 34, has been arrested in Owerri while trying to distribute a kilogram of the illicit drug he cooked and packaged in seven nylon sachets in the Irete Area of Imo state capital on Saturday 26th March.
In Ado Ekiti, narcotic officers on Monday 28th March also arrested a 42-year-old lawyer, Mr. Mayowa Oluwanisomo, in Zone 4, Embassy Island, Moferere area of the Ekiti state capital following credible intelligence that he deals in psychotropic substances. A total of 11, 570 tablets of Tramadol weighing 7.3kilograms were recovered from him when his residence was searched. He admitted ownership of the drug exhibits, adding that he graduated from Ekiti State University, Ado Ekiti and Abuja campus of the Nigerian Law School in 2016.
Chairman/Chief Executive of NDLEA, Brig. Gen. Mohamed Buba Marwa (Retd) commended the officers and men of MMIA, Imo and Ekiti state Commands for sustaining the offensive action against drug cartels in their respective areas of responsibility.
Femi Babafemi
Director, Media & Advocacy
NDLEA Headquarters, Abuja
Wednesday 30th March 2022 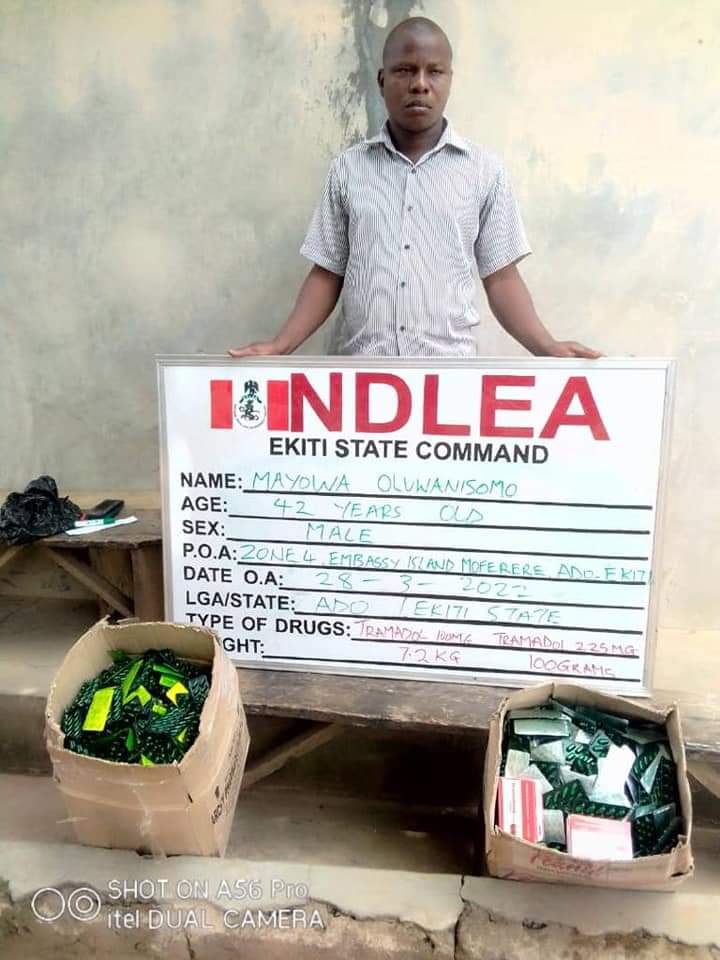