The officer, who took to his Facebook page, said he was dismissed illegally in a set up to cover up the crime of the kidnapping and killing of the son of the brother of the late former Vice-President of Nigeria, Alex Ekwueme. 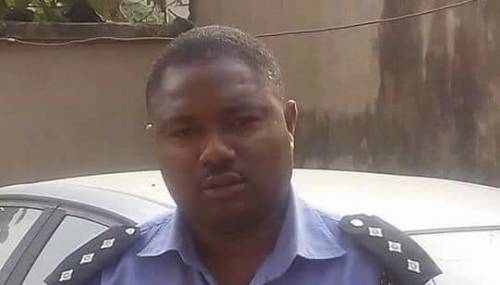 A dismissed police officer, Osondu Christian has begged Nigerians to come to his aid.
Osondu appealed to Nigerians to plead with the Inspector-General of Police, Usman Baba, to comply with the directive of the Police Service Commission and get him reinstated into the force.
The officer, who took to his Facebook page, said he was dismissed illegally in a set up to cover up the crime of the kidnapping and killing of the son of the brother of the late former Vice-President of Nigeria, Alex Ekwueme.
Osondu said he was the team leader of the Strike team in Azukwu SARS in the Anambra State Police Command and had led members of his team to investigate a robbery incident which resulted in the arrest of one Livingston Uzoho.
It was at Uzoho's residence the police found about 32 stolen vehicles including one belonging to the late Ekwueme’e relation who was murdered in the same vehicle. Uzoho was not only arrested, another accomplice identified as Afam Ugada was arrested.
But Osondu said some officials connived with Uzoho to frame him up in the crime which resulted in seven months of imprisonment for him while the suspects were not prosecuted.
He said after the illegal detention, he was confined to a base for eight months and had lost about three promotion opportunities during this period.
He said it came as a shock when it was published in the national dailies that the PSC dismissed nine police officers and demoted six others and his name was part of those that were dismissed.
He lamented, “As of today, the suspect Livingston Uzoho 'M' who was charged for receiving under Criminal Code Law for the Range Rover Sport and Toyota Hilux is still on trial; he has not been convicted or acquitted of the crime in Magistrate Court 1 Akwa Anambra State.
“The Prosecutor is DSP OBI INNOCENT in SARS, Akwuzu. But I have been dismissed and published in all the major Newspapers and social media in Nigeria and my name written on it while the suspect was giving a Soft Landing.
“These are the same police officers whom I took the same Oath to serve the Nigeria police force and Nation Nigeria Rather they decide to dismiss me. While the Five Rank and File who were also involved in the arrest and the using of the ATM card who was also detained alongside me were never dismissed but were given #4 major entry.
“I have given 16 years of my services year in crime-fighting only to be dismissed and sent back to the street to meet the same people I arrested.”
Meanwhile, after several petitions to the office of the Minister of Justice; the Police Service Commission; the Senate President and Speaker of the House of Representatives; the Solicitor General among others between 2018 and 2019, the Police Service Commission considered Osondu's appeal in 2020.
In July 2020, the PSC ordered the reinstatement of Osondu into the force from the 26th of March, 2019.
The PSC stated, “The Police Service Commission has examined your appeal and after due consideration of the facts brought before it, took a decision at its 8th Plenary Meeting held on 9th- 11th, 23rd -25th and 1st July 2020 to reinstate you with effect 26/03/2019 and severely reprimanded with effect from 26/03/2019.
“Details of the Commission's decisions on your appeal have been forwarded to the Inspector-General of Police for implementation. Accept the warm regards of the Commission.”
However, Osondu said the IGP had yet to comply with the directives of the Police Service Commission despite having written a petition to his office via Senator Theodore Ahamefule Orji, CON representing Abia Central Senatorial District.
Top Stories